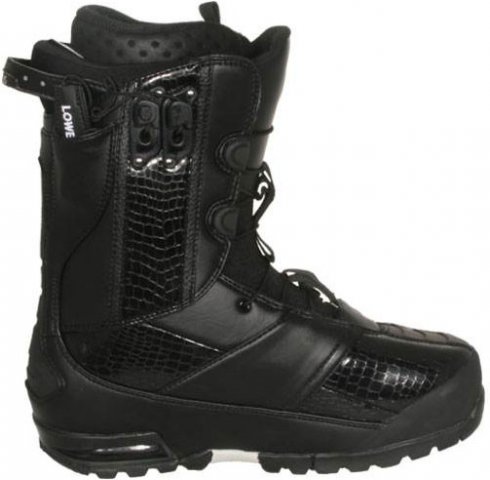 This can compete with many medium to stiff flexing all mountain to freeride boots out there. They don’t have the low profile exterior but have articulating cuffs, speed lace and a 3 D molded tongue which isn’t bad. It runs about 1 size larger than burton boots so it’s best to order an 8 if you normally ride a 9.  You could almost consider the Celsius Opus a low-cost alternative to the Burton SLX with a few minor flaws. So with the large sizing, it does have a lower profile and seems to be only about 1/2 size larger on the outside than the SLX.  Aside from a few minor adjustments, the 2012 isn’t much different from he 2011.

Days on the Boots- approx 15

So this year we did a follow up to the 2010 review.  1st off the Opus 6 seems to have a lower profile when it comes to the width and maybe the length as well. This is hard to describe but last years boot felt bulkier and the materials felt thicker.  It also seems to have a more even flex throughout the boot and the flex also seems to be a bit softer.  It still runs a size larger than what you would normally ride so if you ride a size 9 boot with Burton we’d suggest a Size 8.  Also, a size 8 is just a bit larger than a size 9 Burton SLX with shrinkage. The one big improvement with the Opus is the change in the lacing system.  Before it would not tighten evenly and this year with the new lacing system it does.  However, so far it takes a lot to pull the laces tight but when you do they tighten evenly.   We’d like to see a plastic handle on the tightener instead of faux leather like the Old Burton Speed Lace Boots but it does a good job.  Last year there was one fastening notch per side where this year there is 2 per side.  We’d like to see the Opus 6 have different color laces for the inside and outside because with the addition of the 2 lace per side on the outside then sometimes the laces can get tangled.  The Opus 6 also changed the way the top laces tighten the boot.  They don’t go all the way to the top where the Opus 5 laced a little higher.  That’s not a deal breaker but just something interesting to point out.  It doesn’t feel like it grips and conforms to your foot like some boots in its class.  The sole of the shoe has changed very little and it still has very good shock absorption.  It’s also very sturdy just like last years model.

So far the performance is about the same as last year but the new Opus 6 feel sturdier and conforms better to the foot.  We would like to see it tighten tighter and conform more to your foot but there seems to be lots of support.  All in all, this is a very sturdy, stiff all mountain to freeride boot that will perform very well.

Ok, we never like doing boot reviews due to the pain and discomfort a new boot can cause.  Once you break a boot in you don’t want to use another and dread the day your old ones wear out.   So this review was only done by one person.  Me the editor.  Until then this will be a take on someone who does change boots but hates it.  My go-to boot for almost 2 years has been the Burton SL-X.  I have tried many boots but when it comes to riding other bindings and boards you want to have something you know so that is what I choose.  After riding this year’s Burton SL’s and being very disappointed with how flimsy they are now it was time to seriously look for another boot to replace my slowly dying SLX’s.  At the beginning of the season, I ordered a pair of Opus 5’s and was disappointed in the way they felt.  I returned them before I even rode them.   Being a serious gear whore I looked at many boots and in the end came back to the Opus 5’s to see if I was wrong.  At the end of the season, it was time to see if my beginning of the season and possibly premature judgment of these boots was correct.

So when the new Opus 5’s arrived the boots looked almost different.  The first pair at the beginning of the season looked open and like it was nearly impossible to have it create a snug fit around the foot/leg.  The second pair was wrapped so tight that it was hard to pry them apart.   When I put them on they fit like a glove and I knew the first pair was defective.  I’m so glad I tried them one more time!

When looking at the design they seemed very well built.  The designers didn’t get so nutty about the weight that they forgot quality.  A lot of boots look like they are designed for a 30-40 day a year rider but these look like they are designed by 100+ day a year riders like instructors and shop hands.  I pulled the boots apart and not a stitch anywhere is out of place.  The construction is really sturdy.   These boots have many striking similarities to the SLX except for the audacious price tag.  They don’t have the shrinkage tech or the rebound rods but everything else seems similar.

The soles of these boots look like you could hike every day on rough pavement and not wear through the sole.  If most soles were tires they would be 40,000-mile tread and the Celsius Opus 5 seems like a 100,000-mile tire.  They are thick and heavy but filled with cushioning that will become softer the more you ride.   The articulating cuff guarantees many rides before they lose their response.   The toe is very sturdy.  It’s not like a steel toe but unlike some companies, they get that you are going to crank down your over the toe bindings and you don’t want your boots to collapse.    The insole is the best one I have seen.  It is a thick memory foam top with plastic support and I think EVA foam on the heel from bottom to top to tranlate the shock absorption to the air insole.   Usually, almost all of us at the good ride immediately throw out the insoles and put in either Super Feet or Soles in our boots.  For this boot, I thought about keeping the insoles.

We have a few complaints with this boot.  The lacing system is a little awkward compared to the burton speed lace.  The laces are very long and if you like it tight then you have to pull the upper all the way past your waist.  We know how to shorten the laces but we’d rather have it ready to go.   Also, they use the older Speed Lace that Burton Used a few years back.  They don’t perform as well as the new handles on the top of the line Burton speed lacing.  We also noticed that the Opus lacing system doesn’t tighten evenly as the Burton lacing system does.  If you crank it down you will find it tight at the ankle but loose towards the toe and top.  This is a bit frustrating because I like the top rung tight and my ankle rather loose.  This makes them more like a BOA Focus boot where you can’t keep the top or bottom tight and the other loose without tightening the middle. Another complaint is that the boots take in a little more time to break in than the SLX’s did.  The SLX became your boot in one day where the Opus took me about 10 day’s before all is comfortable.

These laces are more girthy than Burton’s so they should last longer but with only a few days on the boots, it’s hard to say if they will for sure.  They are almost as thick as Salomon’s speed lacing system and we haven’t heard of those breaking except abuse.   I guess it’s because it’s their first year so we look for improvements for 2011.

We try to get as many images of the Celsius Opus, but forgive us if they're not all there.