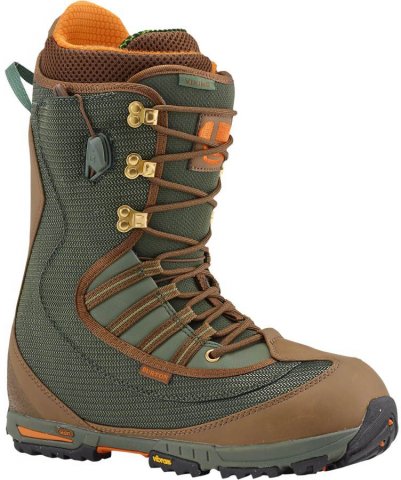 The Burton Viking Snowboard Boot is a high-end lace/speed lace combo for those that want a stiff responsive lace boot but also wouldn’t mind a little more of a locked in the ankle.

The 2016 Burton Viking is very similar to the 2015 except the Rad Pad’s aren’t as good as the 2015. Other than that it’s all pretty close. Also, the boot seems to fit a little more true to size this year where last year it felt about 1/4 size too small.

Flex:  Even though it’s marked a 7 out of 10 like the Imperial it feels like the flex is more on par with the stiffer Ion. Burton boots have gone stiffer lately so the flex rating in 2015 is a lot stiffer than a boot you would have from Burton in 2010.  Each year after 2010 the boots got a little stiffer to where 2015 is the stiffest we’ve seen in a while.

Flex Retention:  I’m not keeping this boot so I can’t say for sure but based on the construction it’s like most high-end Burton boots and it will last a long time. The infinite ride liner (long lasting), combined with a little articulating notch and pretty stiff material will most likely retain its flex for a while but my guess is it will be more like the Burton Ion, which does break down some, than the SLX when it comes to softening up.

Turn Initiation:  Very quick edge to edge and for me, it’s almost too much.

Comfort:  Now the new infinite ride liner isn’t like the old liners from Burton.  They don’t start out comfortable like the other liners and take a while to break in. The liner felt hard against my feet and there are hot spots for sure.  You definitely need to heat mold these boots at a shop if you want to reduce the break-in period.  Lasting a long time comes at a price of comfort at first so heat molding them really helps you break them in and get to a much more comfortable feel.

Adjustability: It’s not quick but with a little knot work you can get upper and lower separation. The ankle speed lace is pretty solid and really changes up the feel of the boot around your whole foot. It’s a much tighter and conformed fit.

Shock Absorption:  Felt like it was right there or even a touch more shock absorbent than the Imperial which has a very similar role.  It’s on the good side of

Traction: Very good traction and we are big fans of Vibram.

Reduced Footprint: When comparing it to other Burton boots the footprint is smaller by a little bit. It’s like the SLX when it comes to footprint which is pretty small.  In some cases, it will be even more than one size smaller than a standard boot.

On & Off Ease:  Not quick on and off but it’s not super slow either.  I’ve been using the Burton Fiend LTD boots a lot and I don’t ever find myself holding up other people because of the traditional lace. These have one more rung but other than that it’s pretty similar.

So all in all this isn’t a bad boot. Lately, I’m not as into the more responsive boots like this but it’s definitely a bump up from the Fiend LTD in terms of flex and response.  So if you want traditional lace with no heel lift and lot’s of response then the Viking could work.  You just will have to have the patience to break it in.

We try to get as many images of the Burton Viking, but forgive us if they're not all there.

I am a new rider that achieved strong intermediate skills this past season. Prior to this season, snowboard boots with speed laces and boa systems were foreign to me so I really wanted to love the Vikings. These boots looked like what boots should look like to me and they actually really appealed to me. Like a dumb ass, I based my decision on appearance. You could probably guess how that worked out for me. I found James' review to be 100% spot on in terms of boot size and hot spots. They run a half size too small (recommend you buy a half size larger than your normal fitting boots). Also, an eyelet for the internal cinch system of the boot "skirt" cut into the front of my inner ankle. I tried to pull the tongue of the boot liner over to add padding between it and my ankle, but it did nothing to stop the pain. Several other home remedies (wearing an ankle brace which proved very uncomfortable and medical bandaid/pads - cue the sissy music) also failed. The tight fit and the hot spots proved too much for me so I reluctantly returned these good looking boots (I didn't turn any heads by the way, but that's not the boots fault). The strengths of these boots are: ankle is locked in - is nearly immobilized, in fact. One additional weakness: The toe of these boots is huge and has an exxagerated roundness / bulbous shape; had a hard time getting my Burton Genesis binding toe strap to fit in the over-the-toe setting (which is what all high end burton bindings are designed to do) and it maxed out the strap extension setting (size 9.5 boot with medium sized bindings). Odd that Burton would make a boot that does not naturally fit its own bindings? Prior to returning these boots, I bought a pair of Burton Ions (size 9.5) and compared them with the Vikings on same equipment (Rossi One Magtek board in Burton Genesis bindings). The Ions were amazingly comfortable, perfect fit, no hotspots (I had not heat conformed either set at that point) and the toe strap fit extremely well over the Ion boot toe. I had a lot of heel lift in the Ions, but the upper speed laces close down on the calf really effectively to provide outstanding response despite some heel movement (thanks to James' advice, I mentally abandoned the concern over heal lift - thank you, James!). I did not find the Vikings nearly as responsive as the Ions and they maybe felt a little more heavy. I returned the Vikings, heat molded the Ion liners and replaced their footbeds with "Footprint Gamechangers" (per James' recommendation - awesome!). Extremely happy with the Ions, but part of me still wonders how a size 10 in the Viking would feel. Can only justify trying unless I take up backcountry free riding where you need to do a lot of hiking. Hope this helps and thank you to 'thegoodride' (James and crew)!

product 0.3
3.0 3.0 1 1 I am a new rider that achieved strong intermediate skills this past season. Prior to this season, snowboard boots with speed laces and boa systems were foreign to me so I really w Burton Viking Snowboard Boot Review and Buying Advice