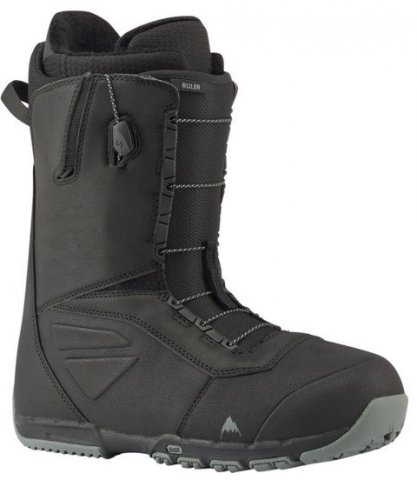 The Burton Ruler one of the oldest boots in Burton’s line.  It’s responsive, comfortable and fits a wide variety of riders. It’s great for those that are committing to the sport for the first time or those that don’t ride a lot every year but want a good boot when they do.

The 2016-2019 Burton Ruler has a few small changes from the 2015 but is still pretty much the same general ride. The main thing is the outer shell is a little different and features a little more ankle articulation.

Still, the older Burton Ruler is a great boot for the price, is super comfortable from day one and isn’t a bad choice for anyone riding 5-30 days a year.

1. It now comes in wide for those of you with wider feet.

2. The sole has been changed from air to gel. It’s the same great shock absorbent sole but now with Gel, it handles cold weather better.

Fit: Great fit that’s true to size for my size 9 feet.  A size 9 boot works just like it should and there is a little bit of room in the front to expand width wise on a forward lean.

Flex: The Ruler has a middle ground flex that borders on Medium stiff. At one time long ago this was one of the stiffest boots in their line and was kind of like the Driver X of it’s day but now it’s been passed up by many boots and it’s marketed as a boot for those who are getting more serious about riding. The 2014 and 2015 Burton Ruler has a slightly easier flex than the 2013 because of the ankle articulation material built in there but the toe box is stronger and the response is the same.

Comfort: Burton has spent a lot of time and research money on making a comfortable boot. The Ruler has

Heel Hold: So most people know that BOA boots with their crazy wrap around the ankle have the best heel hold but this Burton Speed lace boot does a great job holding your ankle in place as well.  Most people are fine with this type of heel hold but it you run a little slippy

Adjustability: There is some excellent adjustability going on with all Burton Speed lace boots and the Burton Ruler is no exception. Speed lace has come a long way since it was introduced many years ago.  It’s almost as easy or as easy as BOA sytem boots and it offers something almost every Double or Even Tripple BOA boot doesn’t…..complete separation between upper and lower laces.  That means you can leave your lower tight and your upper loose if you want.  With BOA the upper and lower cables both cover so much of the ankle that they overlap making the upper and lower not completely seperate. So it’s a choice of adjustability vs. massive ankle support. I personally find that Burton’s adjustability is my personal favorite but other riders at The Good Ride prefer extra support of BOA boots around their ankles.  So it’s all personal preference.

Flex Retention: The Burton Ruler is kind of middle ground for flex retention but there were some improvements in the boot this year with the added ankle articulation but the imprint 2 liner doesn’t really have the flex retention of the higher liners.  This will last a long time but it’s more geared towards the rider that is going to get on the hill 10-30 days a year.  If you are a 100 day a year rider you might want to step up to the Imperial. All boots break down but the Burton Ruler holds it’s flex well for it’s price point.

Turn Initiation: So it seems like only yesterday that I tried my first Burton Ruler. I was coming off a soft pair of beaten down worn out Vans boots that felt like a sock.  I put on the Rulers and I almost turned back up hill because I wasn’t use to that kind of response. If you come from a softer boot like I did it will open up a whole new world for those that ride the mountain and you might never go back. So these days if I compare it to most of Burton’s mountain oriented line this is more of a smooth but responsive boot that will help leverage many boards from semi-challenging to easy turning.  It’s all about mountain riding but it’s a good boot for those that want to hit kickers and the pipe.

Reduced Footprint: Burton’s footprint was the best in the industry for a long time but for 2017 you can now get a more reduced footprint from Adidas to reduce toe/heel drag.  Burton is still very good but with some Adidas boots you can get almost 1/2 to 3/4 of an inch less which is pretty large.

Traction: The Burton Ruler has a nice combo of EVA and Rubber to make the traction good.  It’s good in an icy parking lot or making a side country hike in softer snow.

Shock Absorption: The Burton Ruler offers good shock absorption across the whole sole and makes for a good boot to insulate you from bad landings and chunder.

All in all the Burton Ruler offers up a boot with few flaws for it’s price range and fit’s a wide variety of riders.

2013 Burton Ruler– There is a little bit of a change for 2013 and the style to us looks better this year. The Ruler has less ankle articulation and the flex is a little softer compared to 2012 but the general ride is the same.

2012 Burton Ruler-The Ruler is close to the 2011 except it has some added added comfort, more durable laces and a little more articulation in the ankle.  They also dropped the price a bit which is nice.  To us the 2012 is the call over the 2011.

2011 Burton Ruler– The Ruler regained some stiffness/support but still remained softer than the pre-2010 boots.  There was also a little work on the articulation at the ankle to help preserve the flex.

2010 Burton Ruler–  The Ruler had a complete change that gave it the look it has today. It went from a pretty stiff aggressive boot to a pretty soft but still responsive boot in 2010. There was also the beginning of a little articulation at the ankle but not much.

Heel Hold: Each year the Burton Ruler gets better and better with addressing heel hold.  In the past the heel hold and ankle support was sub par to the higher end boots in the Burton line. Since 2010 we have had no complaints and the 2011 and 2012 are pretty much evolving from there to create more heel hold and more comfort without having to throw in J-bars.

Comfort:  The comfort went from Good before 2010 to Excellent and each year since there are little upgrades here and there that make the Ruler more comfortable. In 2012 they have added what they call “Total Comfort Construction” which is just a BS way to say hey we made the boot fit a little better and feel more comfortable faster.  In terms of comfort this boot is right up there with all the other Burton boots.  We found it really hard to create a pressure point but feet are soo different we think someone out there could find a problem.  Still Burton does more than just about any company out there to make riders feet feel good all day and might please the widest demographic of snowboarders out there.

Flex:In 2010 the Flex was completely transformed from Stiff and Responsive to almost Soft and less Responsive.  The idea is great for comfort but it was just a little too soft. Most of us preferred the 2009 and below better even though they weren’t as comfortable.  The 2011 Burton Ruler added a little more stiffness and a little more response to give us a better blend of both worlds.  So the 2012 Burton Ruler is pretty similar to the 2011 in terms of flex and we like it.  Also the addition of a little more articulation in the ankle will help the boot retain its flex for longer and we like this.

Upper and Lower Adjustability: Speed Lace has it down when it comes to upper and lower adjust-ability.  Burton’s upper and lower speed lace are completely separate.  Burton has worked on making the laces stronger and also created ways to reduce wear when tightening the boots.   Before the speed lace if treated well might last over 50 days before being replaced.  Now we are seeing them still intact even after 100 days.

Response: The Pre-2010 boots were pretty responsive and way before that the Ruler was made to be the stiffest most responsive boot in the line.  With the Addition of the Driver X and other more freeride boots in the line the Ruler has toned back the response.  We don’t necessarily agree with the “From Jibs to Jumps” marketing Burton threw out for 2012 but it’s close.  The flex is still more for all mountain to even some freeriders but it can now do a much better job in the park than it did in the past.

Sole Cushioning: The Burton Ruler has a nice little air bag throughout most of the foot. It’s not super pillowy but it does a great job absorbing shock from most kickers and rough riding.

Traction:  The traction is also pretty good from every year.  Its made to perform well if you have to hike in soft snow or walk in Ice.  It’s not exceptional in either situation but what do you expect for an all mountain boot.

All in all the Burton Ruler boot is a great choice and the upgrade really put this boot back in the running as solid choice in the mid to high end boot category.  This will integrate well with just about any binding and board set up in the all mountain to even freeride categories.  If you like a stiff responsive boot in the jib park this might work as well but you might be a minority here.

We try to get as many images of the Burton Ruler, but forgive us if they're not all there.