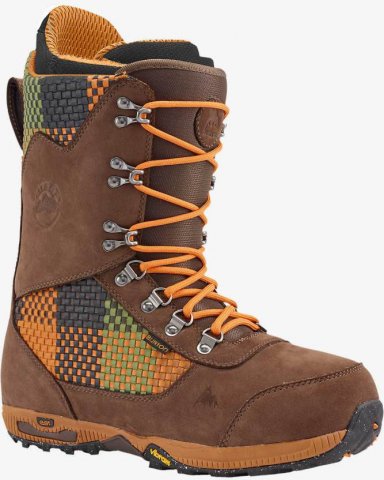 The Burton Rover is relatively new and it seems like it a stepped-up version of the Fiend. It looks old school with traditional lacing but has a lot of modern tech going on everywhere else. 2016 has one change from the 14 and 15 Rovers which is the liner.  It’s now imprint 3 instead of imprint 4. This means that it’s easier to break in but doesn’t last quite as long as the closed cell foam imprint 4.

Comfort:  Very comfortable and very well made. The one thing is the Rad pads aren’t as good as they use to be.  Before there was thick rubber there to make sure the liner doesn’t fold awkwardly on the ankle but now its just some crappy laminate and it often folds on you now. Some don’t care about this but others can feel a little pressure on a toe side turn that over time creates pain.

Heel Hold:  There is good heel hold going on here if the boot is laced well and most won’t need more.

Adjustability:  The lacing system is pretty old school and doesn’t even lock at the top rungs but at least with the right knot at the ankle you can separate the difference between upper and lower adjust-ability.

Reduced Footprint: So we were kind of surprised that the 11.5 Zobel owns is almost the same size as the Thirty Two 11.5 boot he owned before. We aren’t sure if the Rover isn’t as reduced as other Burton boots or that ThirtyTwo is catching up to Burton in this larger size range.  When I know I’ll update the review but all we can say is that it’s not much more reduced than ThirtyTwo right now where usually Burton has almost 1/3-1/2 a boot size smaller on the outside.

Flex Retention: Every Rover from every year has a lot going on with flex retention.  We like the switch back to the standard Burton Imprint 3 liner because it’s much easier to ride on day one than the infinite ride liner from last year.  It won’t hold it’s flex as well as the 14 and 15 models but because of the articulating cuff, it will still last a very long time.  The Infinite Ride Liner from the 14-16 models lasts much longer than the older rebound rods on the previous years but takes a while to break in. For most of us at The Good Ride, Burton boots use to be hot spot free but now with the closed cell foam liners they take a while to break in.  So if you ride 100 days factor in about 8-15 before they mold to your foot.  you can heat mold them and that helps but they do feel softer after and it’s not as good as slowly breaking them in yourself.  You can also shave off foam where you have tight spots and such.  The articulating cuff is the real hero here though and it will help the Rover hold it’s flex for a long time. Many stiffer boots will start out stiffer but after 40 days this will be stiffer.

Response:  Pretty good response here and it feels like it can handle a wide variety of boards. Zobel has ridden this with everything from Jib to freeride boards and they worked well.

Traction:  Vibram sole =’s excellent traction. In a world of slippery single mold EVA foam, this is a welcome addition for anyone who actually wants to do some backcountry hiking or even just get through an icy parking lot without falling.

Shock Absorption:  Good but not great shock absorption and it has a similar set up to the 2013 Burton Imperial. It’s definitely optimized for Burton EST bindings but paired with Burton Re:Flex bindings there is pretty good shock absorption.  If you pair them with bindings that have less padding underfoot you can get pretty good board feel but at the expense of minimal shock absorption.  One thing that’s cool with the Rover is the soles lean into the inside of your bindings easy so it reduces joint fatigue on your ankles, knees, and hips.  It makes a wider stance more doable for a full season compared to boots that don’t have this tech.  It’s not as pronounced as the Burton Ion’s but it’s a hell of a lot better than boots like the SLX’s that really put a strain on your joints.

We try to get as many images of the Burton Rover, but forgive us if they're not all there.