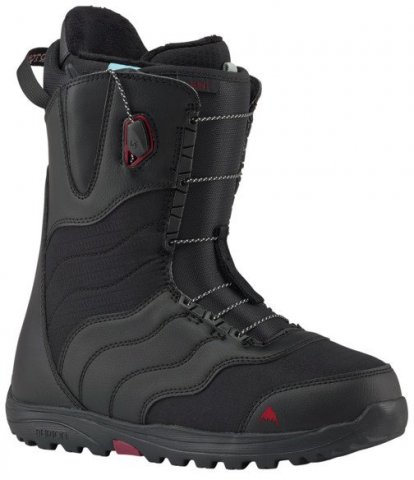 The Burton Mint has been around for a while and is one of the better choices you can make as a beginner. It’s more than a beginner boot and it can hang in there for a while as you progress. It’s got a lot of things and entry to a more advanced level rider will like.

The Mint is comfortable, forgiving and very well built. You also get a decent amount of tech for a boot of this price.  As a beginner and possibly an intermediate you won’t care too much about this and might even like it better but as you progress you might realize that this isn’t as good as a ride as the higher end boots.

Flex: This very much defines the medium/soft flex definition and it’s got a very forgiving feel with a little response in there for a rider to start engaging into harder turns.

Comfort:  Burton makes very comfortable boots that work for a wide variety of feet so this will be easy to start out on day one without too much of a painful breaking in process. Not everyone will agree but most will.

Heel Hold:  Burton holds in the heel well enough and most beginner riders shouldn’t have issues with it.

Adjustability:  Speed lace is easily adjustable and great for those that like to separate their upper and lower lacing.  Almost every BOA boot does not do this.  Both are really easy to lace up too.

Flex Retention:  You can’t expect much for a boot of this price point but there is some flex preservation.  This boot isn’t made for the 100 days a year rider but is much better for riders that plan to go 5-15 days a season.

Response:  Pretty decent response for the flex but it’s not about that. It’s about support and being comfortable so you can learn new things.

Traction:  The 2014 Burton is now using an almost single EVA Foam sole and it doesn’t make for the best of traction compared to the 2013 and below Mint.  It saves money to not top it off with a lot of rubber which makes the boot grip better but it’s good enough for learning. It’s also lighter for 2014 because of this change and that’s not usually a bad thing.

Shock Absorption:  Lot’s of EVA foam in the boot and it seems Burton understands flat landings are part of learning.

So all in all the Mint isn’t that bad.

The 2013 Burton Mint isn’t much different from the 2012 either. The Burton Mint is a better choice for beginners but intermediate to maybe even advanced riders on a low budget will most likely prefer this over many of the others in the same price range.

The 2012 Burton Mint added a snowproof internal gusset which is nice but we have never really had any issues with snow getting inside.  Other than that it’s pretty similar to the 2011.

The 2011 Burton Mint has has 2 zones instead of one which was needed and expected.

The 2010 Burton Mint’s speed lacing system was a single rope so it’s not as easy to tighten the upper and lower sections.

We try to get as many images of the Burton Mint, but forgive us if they're not all there.