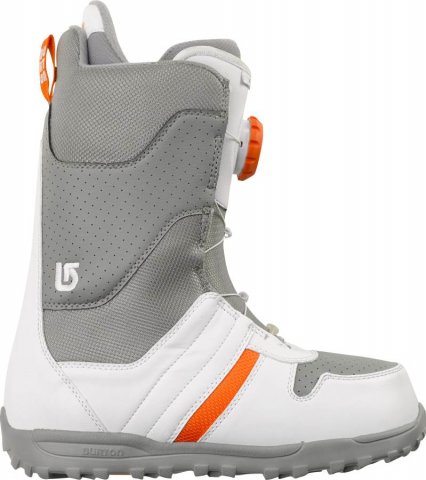 The Burton Jet is an entry level Burton BOA.  It has a reduced footprint which is good because there aren’t many reduced footprint BOA’s. The one difference between this BOA and other BOA boots is this BOA doesn’t use a steel cable but instead, it’s the same lace in speed lace attached to a BOA mechanism.  It’s also running through the same track that their other speed lace boots use so it’s very comfortable but it doesn’t have that wrap around the ankle thing going.  It cranks down harder on the ankle than the Speed Lace but it’s still a little behind most BOA’s but not by too much. So this is a nice compromise between speed lace and traditional single BOA Boots. Still to us if it was our money we’d spend $150 on the Burton Moto instead but to each his own.

The one thing we don’t like about the Jet is the elimination of the EVA/Rubber combo sole that most boots have.  Instead, it has an almost 100% EVA sole and that makes the boot’s traction drop a bit and it also wears down a bit faster. It’s lighter and more shock absorbent though.

Regarding Reduced Footprint: Burton’s footprint is almost a full size smaller on the outside but the same size on the inside. So a size 10 boot is still a size 10 on the inside but more like a size 9 on the outside.  This really reduces toe drag and Burton is the best in the industry when it comes to this. The warmth and feel of the ride are unaffected and all you have is a bootless likely to catch the snow on a hard turn or in steep terrain.  This is great for those that have big feet, ride narrow waist boards or are in between the board and binding sizing.

We try to get as many images of the Burton Jet, but forgive us if they're not all there.

The BOA on this boot uses a cord instead of a wire. Broke after three days on the slopes. Very disappointing. Otherwise a great boot.

product 0.3
2.0 2.0 1 1 The BOA on this boot uses a cord instead of a wire. Broke after three days on the slopes. Very disappointing. Otherwise a great boot. Burton Jet Review And Buying Advice