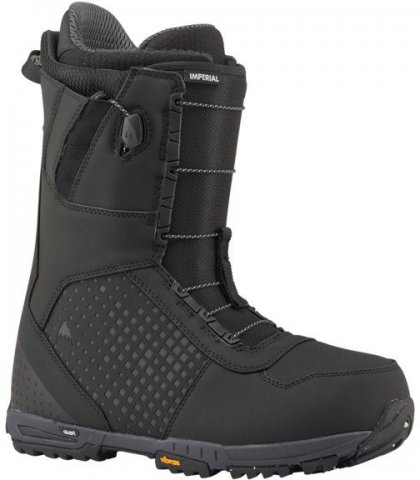 The Burton Imperial is a pretty decent balance between price, tech, and performance. While it’s not perfect it does a lot of things right and it’s a very recommendable boot for a wide variety of riders. While the overall design hasn’t changed much from 2016-2018 there are some minor changes like the elimination of the rad pads and a varying flex year to year.  2016 and 2017, to us, were a little softer but 2018 seems like its a touch on the stiffer side.  It feels like it matches more of Burtons flex rating.

There is little that’s changed from 2016 to 2017 and the boot feels very much the same from either year.

There are some changes for the 2016 Model.

Flex:  The flex feels a little softer than years past but it’s still in the medium range.

Comfort:   Same very comfortable boot however this year the boots took a few days to break in where usually they are comfortable day one.  It might be the tighter heel area in the liner.

Heel Hold:  Definitely an improvement over previous years with the tighter liner in the heel and the improved speed lace.  I’m not sure it will win over people who had issues with heel hold in the past but if in the past it felt like it almost could work now it probably will. I’ve never had a problem with heel lift with these boots.

Flex Retention:  My biggest issue with this years model There is no more articulation in the ankle and it’s starting to get some wear points after only 10 days. The flex hasn’t changed much yet but I’m expecting it not to hold up as well as it did in the past. I really wish they had the same articulating cuff like the Burton Fiend and Fiend LTD. If that was the case these boots would last a long time. 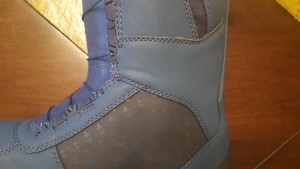 Response:  Just about the same response as we have always experienced with these boots.  Nice medium to the medium plus response.

Footprint: The 2017 line has not changed in footprint but a lot of the industry has caught up with it and Adidas has passed Burton’s footprint by up to 1/2 to 3/4 an inch for my size 9 boot.  It’s still very reduced but it’s just not the leader any more when it comes to reducing toe and heel drag.

On & Off Ease: Super easy on and off.

So all in all despite the lack of articulation this year and the less than adequate rad pads that detract from flex retention, the Burton Imperial is still a top choice for those looking for a good 50-100 day a year all-mountain boot.

The Burton Imperial has changed a bit in 2014 and it’s even a better boot than before. For us this offers a lot of solid performance and higher end tech at a reasonable price point. It’s one of the better boots you can get at this price point.

The 15 and 14 Burton Imperials are almost exactly the same.

I use to ride Burton Ions but after last the more I rode the Imperials the more I fell in love with them. Yes the Ion’s are still a better boot but for the price the Imperials offer up a very comparable ride and offer up a little more shock absorption which is important to me.

Approximate Weight: Size 9 Imperials are 4 lbs for the pair of boots so 2lbs each.

Fit: A size 9 boot fits my size 9 feet perfectly. The toes barely touch standing up and then barely don’t touch on a forward lean. They also don’t pack out much over time so you don’t have to start out with a smaller size and stretch it out to fit. Also the toe box is a touch wide. Not ideal for wide feet but it gives you a little room width wise to let your front foot stretch out width wise on a forward lean. I’ve also never felt my toes go numb in these thanks to this little smidge of space.

Flex: The flex of the Burton Imperial 2014 feels a little stiffer and more supportive than the previous years models. Also the toe box seems to be stiffer too so hopefully it won’t break down as fast.

Comfort: For most riders Burton has some of the most comfortable boots in the market. Hey every foot is different but many find Burton boots very comfortable. Also Burton Imperials have a nice angle in the upper part of the boot that is more in line with the stance you have when snowboarding. It’s similar to an auto cant in the Ion and Hail and reduces fatigue when riding. It’s also not weird or over canted when riding on a canted binding. The 2013 Imperial use to have a little extra padding in the cuff of the liner that caused some pressure until they broke in. The 2014 has a smooth much more comfortable liner this year.

Heel Hold: Most of us here have found that Burton’s heel hold has improved a lot over the years and it’s not that necessary to use J-Bars. Still that option is there but for most this will be fine. If you are one of those riders that have difficulty getting their heels to lock J-Bars might help get this to excellent. Burton’s boots aren’t there Toe to Toe with many double BOA boots but they are pretty close and most will be more than fine with Speed Lace and this boots hold. All of us are.

Adjustability: Double BOA boots might have a little more heel hold but they often overlap and don’t really create separate and lower adjustability. With Speed Lacing from Burton the Upper is completely separate from the lower and they don’t share the ankle. This way you can have the upper be tight and the lower be loose. If you tried that with most Double BOA boots the Ankle would be tight even if the lower was loose. Some don’t care about separate adjustability but for those that do Speed Lace is the call. Also one great thing about the Speed Lace these days is it doesn’t fall apart like it did in years past. Now Speed Lace is getting better to lasting the whole life of the boot. In the early days it might only last 50-100 days before starting to frey and break apart.

Flex Retention: There is a little bit extra articulation in the ankle of the boot this year that will help preserve the flex longer than previous years. That combined with some of the other tech in their liner and shell makes for a longer lasting flex. No boot keeps their original flex but this holds up longer than most. If you ride a lot of days the Burton Imperial 2014 is a great choice.

Response: The Burton Imperial 2014 offers up a little more support and the response feels like it’s a bump closer to excellent. It’s very easy edge to edge and can power most boards. It’s best with moderate to semi-challenging turning boards but we had no problem with all other types as well.

Traction: Hiking in thick soft snow to walking in icy parking lots we haven’t had any issues. Vibram outsoles are outstanding and it’s nice to see this on a $300 boot.

Shock Absorption: This is my one complaint. I felt that the previous Models had better shock absorption. This still has great shock absorption but Burton has been moving more towards the skate shoe feel with all their boots and have been reducing the profile. If you come from a skate background you will love this but if you are like me (a guy who likes to preserve his body) you might not be stoked on it. Still it has more shock absorption than the Ion.

Footprint: Very reduced footprint and Burton has been the leader with this. My size 9 is more like a size 8 on the outside. This doesn’t matter as much for riders with my size boot but it’s a game changer if you are a size 10-11 US boot.

On & Off Ease: This is really easy. The only boot that is faster are the boots that have a BOA or speed lace on the inside. This is a great balance of speed and exceptional adjust ability.

2013 and Below Burton Imperial Review.

The 2013 Burton Imperial has a lot more articulation in the ankle this year and it’s definitely the call over the older models. There is also a leather version this year so for $59 extra that is a little stiffer you can get that but it’s really close to the regular Imperial There is no real difference in performance. To us comfort can sometimes beat performance but you don’t have to worry about either with the Imperial. It’s a very safe choice.

One quick thing. Either the laces are more durable or the speed lacing was re-designed the last 2 years. Either way, the laces last a lot longer than the older laces.

Flex: It’s on the Aggressive side of medium and for most all mountain riders near perfect. There is is more response than you would think for the flex and that is always nice and it plays well with Stiff to Medium flexing boards well.  We’ve even had fun with soft loose boards.

Comfort: Very comfortable except the 2013 model seems to have one little issue. The liner has a little extra padding in top of the ankle that can feel a little uncomfortable at first but after a week or so it packs out a bit. At first I thought it was a problem with the rubber rad pads but after more tinkering I discovered that it was the extra padding in the ankle that was causing the discomfort so disregard the review.

Heel Hold: Great heel hold and you can always put in J-Bars if you need more.

Flex Retention: There is a little articulation at the ankle to keep its flex but not as much as other boots we’ve seen like the SLX with full articulation from spine to ankle.

Response: The response is pretty good for a mid-level Burton boot and borderlines on excellent. It can easily initiate a turn on just about any stiff-flexing board with not too much trouble.

Traction: The imperial has the same Vibram sole and similar sole design as the Driver X so it’s great for hiking in softer snow or climbing steep stuff thanks to the spikes in the toe, but it’s better walking on ice on the way to the lift than the Driver X.

Shock Absorption: Really great cushioning without hindering too much board feel or response. If you want some padding then this is the call over the Ion.

The Imperial is one of those nice compromises in price for a serious all mountain to freeride rider that wants good response and support. If you want a boot that will perform well throughout a solid 100 day season this is one of our favorite choices.

We try to get as many images of the Burton Imperial, but forgive us if they're not all there.