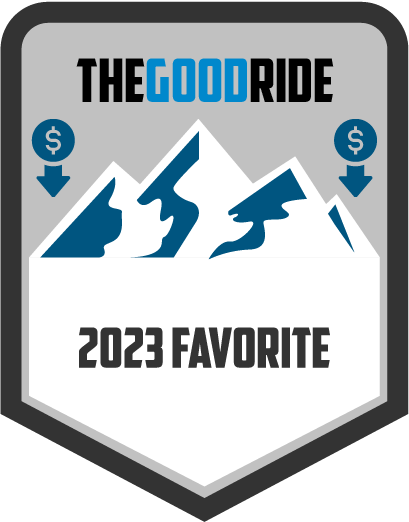 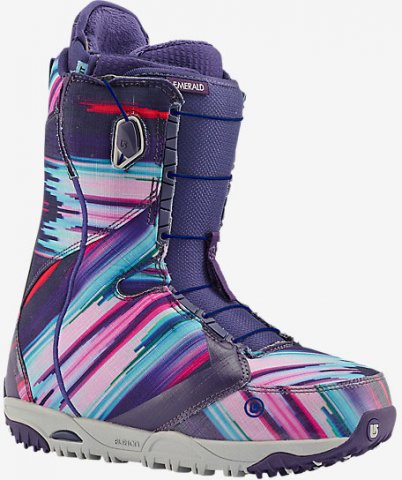 The Burton Emerald has been around for a while and has proven its self as a good all mountain boot for many ability levels and riding styles.

For 2016 the Burton Emerald the Speed Lacing system wraps better around the whole foot and feels better when it comes to supporting without being stiffer.

Flex:  The Emerald has a nice medium women’s flex.  It’s soft compared to men’s boots but for women, it’s more medium. This allows a nice balance of response and a forgiving ride that isn’t over enthusiastic when it comes to turning.  That means it’s a little more forgiving than stiffer more responsive boots are.

Comfort: Every foot is different but Burton makes very comfortable boots that appeases probably the widest varieties of feet. Each year it seems that Burton gets better at making your first day in the boot better than it should be. Nothing’s perfect on day one but this is about as good as it gets so far.

Heel Hold:  Pretty solid heel hold here but if you are one who has problems with heel lift you might like Burton’s Speed Dial better or a BOA boot. We prefer the separate upper/lower adjustability of the Emerald but some might prefer no separate adjustability and more heel hold. It’s all personal preference.

Adjustability:  Burton’s Speed lace is outstanding.  Every year they make it better and the laces are lasting longer and longer before having to replace them.  Now it’s not uncommon for the laces to last the entire life of the boot.  It’s a give and takes when it comes to Separate Adjustability vs.Heel hold so it’s up to you to decide what’s more important.

Flex Retention:  The Emerald doesn’t have a lot of articulation or high-end flex retention tech but its flex holds pretty well for the first 30-50 days and then it starts to slowly decline.  That’s pretty good for a boot of this type and for its the price range. A 100 day a year rider can definitely go with these boots because they hold together well over time but there are higher end Burton boots that last longer.

Response:  The Emerald has been in Burton’s line up for a long time and is the kind of boot that generates very quick turn initiation compared to other boots with similar support ratings.

Traction:  Pretty good sole for solid traction in most situations.

Shock Absorption:  Burton has been reducing the thickness of the footbed with all their boots but the Emerald still has a lot of good shock absorption.

On & Off Ease: Very easy on and off and Speed lace is just as quick as Double BOA.  It’s faster on and faster to make quick adjustments but it’s a little slower off.  All in all, it’s pretty even.

All in all, this is a great boot for the price and it can make a wide variety of riders very happy.

The 2013 isn’t much different from the 2012 except for a few small tweaks to the adjustability.

The 2012 has a new design to make the comfort factor a little bit better.

The 2011 stiffened back up a little and added a place to put foot warmers in.

The 2010 model is a little softer than the others and tended to fold at the ankle/flex point of the boot. This can cause pressure points.

We try to get as many images of the Burton Emerald, but forgive us if they're not all there.

Bought these boots for my daughter based on recommendations from The Good Ride. They're perfect. It's her first year boarding and she can ride all day with excellent control and comfortable, warm feet. Combined with the Burton Scribe bindings and a Frenemy board The Good Ride was spot on with a package that didn't cost a fortune and provides an awesome riding experience.

product 0.3
5.0 5.0 1 1 Bought these boots for my daughter based on recommendations from The Good Ride. They're perfect. It's her first year boarding and she can ride all day with excellent control and Burton Emerald 2016-2010 Snowboard Boot Review