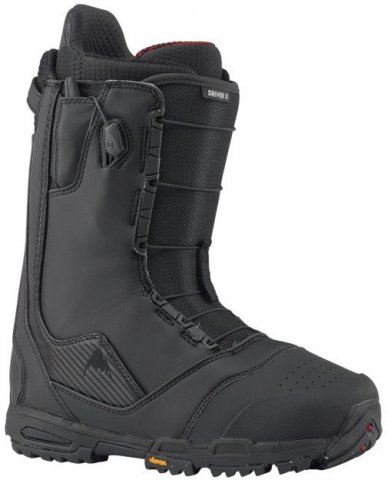 The Burton Driver X has made a reputation as one of the better aggressive stiff flexing boots out there. The Driver X has been around for a long time and has the reputation of Burton’s most responsive aggressive all mountain to freeride boot.

The 2017 Driver X is pretty much the same as the 2016 but in 2017 some of the industry caught up to or passed Burton when it comes to footprint reduction. Burton is still really reduced but Adidas now has boots in size 9 that are 1/2″ to 3/4″ smaller than my size 9.  I’m not 100% sure how it compares with half sizes yet but it seems that Adidas is the better boot now to reduce toe/heel drag.

The 2016 Burton Driver X is not too much different from the 2014 and 2015 but there are a couple of minor differences.

So, all in all, there are some positives and negatives with the 16 Driver X but it’s still a very fast aggressive boot that’s a lot like the 15.

The Burton Driver X is a boot that my crew and I have a lot of experience with.  We have used this many days and rode this with many aggressive all mountain to Freeride boards. As you probably know this is one of Burton’s stiffest boots and it is here to create a lot of quick edge to edge response so the board underfoot doesn’t feel as difficult to turn. Paired with a good aggressive binding like the Burton Diode you have a really responsive setup. The Burton Driver X isn’t for everyone though and is more for Expert riders than advanced riders.  Often times Boots like the Imperial or Ion will have enough response to turn your board while at the same time be more forgiving.

The 2014 and 2015 Burton Driver X boots are very similar except for one thing.  The 2015 has an improved Vibram sole that has better traction across the board.  Before the Driver X was really good in soft snow but weak in ice.  The new traction pattern isn’t quite as good in softer snow but it’s much better in all other conditions.  Also, the sole has a little less material than past soles that helps reduce weight but at the same time has the same shock absorption qualities as the 2014 model.

Regarding Reduced Footprint: Burton’s footprint is almost a full size smaller on the outside but the same size on the inside. So a size 10 boot is still a size 10 on the inside but more like a size 9 on the outside.  This really reduces toe drag and Burton is the best in the industry when it comes to this. The warmth and feel of the ride are unaffected and all you have is a bootless likely to catch the snow on a hard turn or in steep terrain.  This is great for those that have big feet, ride narrow waist boards or are in between the board and binding sizing.

Fit: The size 9 boot fits my size 9 feet perfectly and I like that there is a little extra room width wise in the front of the boot so my foot can spread a bit width-wise on a forward lean.

Flex: This is about as stiff as it can get for Burton boots and this was tried without the power panel inserted into the 3d tongue and it was still very stiff. Also, you have a liner with more flex retention than the normal Imprint 3 liner.  That is why they call it 3x.

Comfort:  Despite its stiff almost old school ski boot feel the inside is very comfortable.  Obviously, with stiffer boots, it takes longer to break in but Burton does a very good job at reducing the break-in period and it’s pretty comfortable from the start. All feet are different but this is one of the better boots we came across when it comes to enjoying your first day on the hill with the boot.

Heel Hold: So there is definitely a trade-off between separate upper/lower adjustability and heel hold. This is a pretty stiff boot and when laced tight it holds pretty well.  Although it doesn’t have that massive grip around your heel it always handled our ankles no problem.

Flex Retention:  The Driver X is very stiff but over time the older models broke and softened up. As the boot breaks in and softens up you have the option to insert that panel to keep it’s stiffness up or you can just keep it in all the time.  In addition to the re-introduction of the power panel, Burton has what they call a 3x liner which has what they also call a rebound rod and it gives a little extra flex retention as well.  The rebound rod is bigger and better than the older Burton Driver X’s so combined with the power panel the flex retention is better than years past. Before it would break down pretty quick and in 40 days you would have a much softer boot.

Response:  Excellent response. Some might even complain that there is too much responsibility.  If you are an intermediate or even a borderline advanced rider you might be better off with a less responsive boot because it can lead to you catching your edge easier. However, if you are a very strong advanced rider or Expert rider who loves the most response possible then the Driver X is your boot.

Traction:  The 2014 Driver X was not ideal in an icy parking lot but really good keeping its grip in soft snow.  2015 is much better in all conditions traction boot.  Its pattern is similar to all the other boots out there in Burton’s line.

Shock Absorption:  Pretty good shock absorption and although not super soft it’s super damp and made for those who like speed and big landings. There is a good bit of gel in the heel.

The Driver X in 2009 and below was arguably the stiffest boot out there but in 2010 it became much much softer.  Before it took everything you got to bend the boot in the shop but in 2010 you could fold it without too much effort.

For 2011 Burton brought back some but not all of the stiffness we were use to and kept most of the response.

In 2012 the stiffness and response is pretty much the same as 2011 but there is more comfort than before.  We also like how they brought back the power panel insert for the Tongue in 2011 and 2012.  It will add to the stiffness and make the boot last longer. The 2013 Burton Driver X is very similar to the 2012 but there is one minor improvement in heel hold with a little extra grip around the ankle area.

Flex: The Burton Driver X used to be a very very stiff boot.  It actually felt like a ski boot in the old days.  In 2010 Burton softened up the boot a lot and for the first time you could flex the top into the toe. The response was lessened a bit in 2010 but not as much as you would think for it being soo soft.  In 2011 the Driver X was stiffened up a bit but nothing like it was before.  It’s still rather easy to get a flex out of it where before it wouldn’t budge. The response is almost the same as it use to be though so that is a nice trick of giving a decent comfortable flex with the same response of the old super stiff boots.  In 2012 remained pretty much the same as 2011.

Comfort: Many stiff boots don’t give so usually your feet do first so that is a problem.  Since Burton softened up their boots the complaints about breaking in the Driver X went down.  This is still a pretty stiff boot but it’s nothing like it use to be.  The softening of the flex and a re-design of the Driver X makes it even more comfortable than it was before.  Burton claims no break in period.  We can’t say this will be true for everyone but we all have fewer issues on our first few days. Usually it’s a good idea to bring your old boots in case you get some pressure points or blisters with the new boots you just bought but now it’s ok to just bring the new Driver X’s.

Heel Hold: The Driver X has always held the heel in place and that hasn’t changed.

Upper and Lower Adjustability: Speed Lace is constantly improving. The upper and lower adjustability with speed lace is the best quick lace systems.  You can also tighten up the boot incredibly tight and have the minimal pressure points.  These hard plastic handles are easier to store in their pouches, helps you crank the laces harder and easier than the old synthetic leather grips.  It’s a lot closer to cranking it down like you can with a BOA boot and for the most part creates fewer pressure points.

Response: Even though the Driver X is softer the response is almost the same as it was in the days before the 2010 softening trend.  This can bend almost any board torsionally.  We weren’t sure at first about the softening but now quite enjoy the added comfort for similar response.  It’s not super stiff any more but the Driver X still competes with the Likes of the K2 Thraxis and Salomon Malamute.

Traction: These are supposed to be excellent in ice because of the ice spikes but we haven’t felt that.  These boots seem to be a little more slippery walking on those ice patches on the way to the mountain.  However the grip in softer snow is awesome.  Also hiking up steep trails through tracks or setting your own is awesome.

Sole Cushioning: The Driver X doesn’t have the cushioning of the Ions but it’s a lot softer under foot than it looks. There is some serious cushioning riding on top of hat thick spikey Vibram sole and it gives alot of shock absorption at higher speeds or on big jumps.  It also felt good to walk long distances in despite the now med/stiff flex.

All in all the Driver X is a great boot for someone who wants the most response Burton has for making stiffer boards turn in critical situations.   It’s a perfect ballance of comfort and response.

We try to get as many images of the Burton Driver X, but forgive us if they're not all there.

After 2 months of good riding my boot looks new but the liner has worn in the archilles heel on both liners. I had them fitted properly and i have orthodics. I have complained to Burton and apparently they dont sell liners seperately. Buck ferton!

product 0.3
2.0 2.0 1 1 After 2 months of good riding my boot looks new but the liner has worn in the archilles heel on both liners. I had them fitted properly and i have orthodics. I have complained to B Burton Driver X Review And Buying Advice