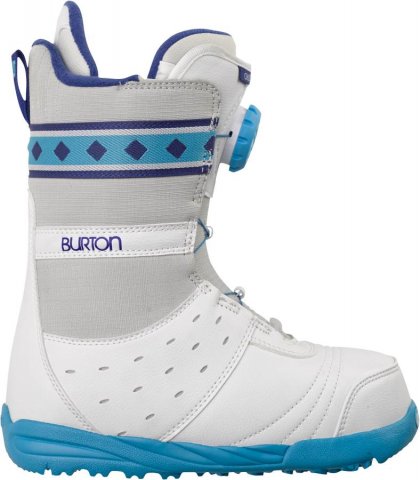 The Burton Chloe is new for 2013 and BOA in a Burton BOA kind of way that they call Speed Dial. We are big fans of speed lace so at first, we weren’t that big into Burton going BOA but the more we have played around with their BOA system the more we feel it’s not a bad solution for a beginner rider who needs the easiest way to lace up a boot and have one less thing to think about. We are still bigger fans of the Mint but this is not a bad boot for the price.

Flex:  The Chloe has a nice easy forgiving flex that almost doesn’t feel like a boot. It almost feels like snow boots instead of snowboarding boots.

Comfort: Even though these boots are cheap they are very comfortable.

Heel Hold:  There is a pretty solid grip around the heel and the Speed Dial can grip and hold pretty well.  It’s not there with some BOA Coil systems that wrap around the ankle but it’s good for keeping your heel pretty locked in.

Adjustability: The adjustability is just like a single BOA and that means it’s very easy to adjust but you can adjust your upper and lower separately.

Flex Retention:  Burton boots in general hold there flex pretty well but this is an entry level boot.  It’s going to hold it’s flex better than many entry-level boots but it’s not going to be as good as some of the other boots in Burton’s line.

Response:  There isn’t much response from this boot but that is what you want as a beginner because it makes it more forgiving.

Traction:  Pretty good traction in an icy parking lot but nothing for the record books either.

Shock Absorption:  Nice and soft for that awkward or flat landing.

We don’t know why Burton feels they need BOA but if you are looking for the easiest boot to lace up you have the Burton Chloe. The one difference between this BOA and other BOA boots is this BOA doesn’t use a steel cable but instead it’s the same lace in speed lace attached to a BOA mechanism   It’s also running through the same track that their other speed lace boots use so it’s very comfortable. So this is a nice compromise between speed lace and traditional single BOA Boots. If you want a little more choice in the way you adjust your boot then look to the Burton Mint in Speed Lace or even the Traditional Lace Burton Coco.  They perform just as well as the Chloe and have better lacing systems….at least to us.

We try to get as many images of the Burton Chloe, but forgive us if they're not all there.