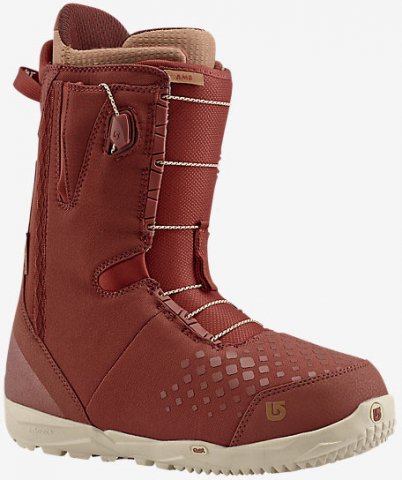 The Burton AMB is basically the continuation of the Burton Ambush and has lot’s of similar characteristics and evolved characteristics.  It’s a pretty solid mid flexing boot kind of ride. Not much has changed from 2016 to 2017.

Approximate Weight 1.8lbs per boot and 3.6lbs per pair

Flex:  Medium bordering on med/soft and it’s a nice balance between support and freedom of movement.

Comfort:  The Burton AMB is very comfortable and it’s the kind of boot that you might not have to break in too much or at all.  I was pretty much hot spot free day one and didn’t have to change out half way through the day due to new boot pain. Burton fit’s a wide variety of feet but it’s no guarantee that Burton works for you because all feet are different.

Heel Hold:  I rarely ever have problems with heel lift and didn’t with the AMB’s. The new lacing system seems to wrap around my entire foot better though and I think it will help with eliminating heel hold.  I don’t think it’s a major bump from the old speed lace system but it’s for sure a change in the right direction.  Still, if you want a lot of heel hold then you might be better off with the Burton BOA boots.

Adjustability:  Love the separation between upper and lower lacing and it makes for a good boot if you want your upper tight and lower loose or vice versa.

Flex Retention:  Not as much articulating tech as the old Ambush boot but still very good. It seems to work really well and there are no wrinkles yet from forward flexing. After one day of riding many boots have visible wrinkles but this flex should hold up well for a 100 day season.

Response: Not a blow your doors off kind of turn initiation but the kind of boot I personally love for freestyle to jib boards. I’m personally not into super soft boots so for others this will be fine with all mountain freestyle to even all mountain boards. It’s a very park friendly boot but it still has enough response/support to make a hard carving turn on the mountain.

Traction:  Kind of bummed about the single mold EVA foam here but at least it has a couple of patches of rubber near the heel and toe. You can get through an icy parking lot still but I wish there were more rubber patches in the boot.

Shock Absorption:  Really solid cushy shock absorption and that soft EVA foam does do a good job giving you a cushy feel underfoot.

Reduced Footprint: Burton use to own it when it comes to reducing toe/heel drag but for 2017 Adidas now has a much more reduced footprint boot. Burton is still very good but if you really want to size down on the outside Adidas is the call.

On & Off Ease: Outstanding when it comes to getting the boot off and on.  It’s faster than Double BOA getting the boots on but a little slower getting them off. Also, micro adjustments are much easier because when you release the lacing from the hook it doesn’t slide back far as BOA does so you don’t have to start over if you are too tight.

So all in all the Burton AMB boot isn’t absolutely perfect because of all the exposed EVA on the sole but the rest of the boot is hard to complain about.

We try to get as many images of the Burton AMB, but forgive us if they're not all there.