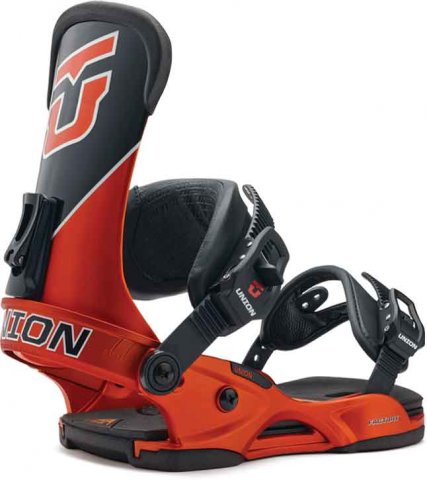 So The Union Factory is like a more aggressive and beefy Union Force. It’s got the higher end/lighter base plate that the Atlas had but it’s got a lot more padding and a canted footbed.  The 2014 and 2015 Union Factory are very similar except the 2015 added a tool less adjuster for the toe strap making it much easier to adjust on the mountain.

The only real difference between the 2014 Union Factory vs. 2015 Union Factory is the Ankle strap connector is a little shorter.  Some might not be able to line up your ankle strap properly with your boot.  If that’s a problem contact Union and they will get you the 2014 ankle strap holder.


On the Factory, there is a base plate similar to the higher end Union bindings but it’s got a lot more padding and It’s also canted.  The high back that looks kind of like the Contact but it’s much more responsive and stronger.  The plastic and fiberglass combo seems to make much more sense than the Chargers Carbon Fiber high back.  It seems like it can stand up to abuse more, have a better twist and still offer up a lot of response.

So when we got on the binding the first thing we noticed was we felt like Elvis in the late ’60s on platform shoes minus the excessive weight, caped suit, and flatulence. It took a few runs to get used to but after about 1/2 day you forget about it. I think the extra elevation might make for a little better leverage and response as well as provide more cushioning. The Factory can provide response enough for almost any stiff freeride board but it can also work very well with medium flexing all mountain boards.  It can cruise equally well as it bombs.  This could work for the rider who likes to cushion bones that had hard living as well as provide a great ride for those that like to bomb the shit out of the mountain or park.

Flex: The high back is aggressive but still flexible. What do I mean by that? It’s pretty medium to medium soft when you twist it but when you pull straight back there is little to no give. I own the Factory and the Force and the Force feels like the force might be a little bit stiffer than the factory even though it’s high back is cored out.

Adjustability: We really like that you can customize the heel loop length to your boot size.  If you want to rotate your high back it takes a lot of work compared to other bindings as the screws go through more than just the high back making it a pretty difficult process compared to other bindings.  The 2014 toe strap requires a tool and we’d like to see it be toolless like the ankle strap.  Many other bindings allow you to adjust the angle of your ankle strap too and this doesn’t give you any options as well. The 2015 toe strap screw is much better because it doesn’t require a screwdriver which almost makes it worthwhile to get the 2015.  You could probably buy the part from C3 though if you want to upgrade your 2014.

Comfort: Despite its lack of adjustability it’s pretty comfortable.  Its ankle straps aren’t too cush but they don’t provide pain either.  They fit well around the ankle. The footbed is pretty cush and feels nice underfoot. The canted footbed is a bonus too because most bindings in the Flux line don’t have a cant and it seems to be better for the body.

Turn Initiation: This is a very responsive edge to edge and is a solid choice for those that want to bend their board edge to edge.  It doesn’t feel like a sharp edge to edge as the MC or Charger.  The response is probably the same but somehow it feels smoother.  Maybe it’s because of all that EVA foam padding on the footbed.

Buttering: So the reduced dead spot tech underfoot in the bindings makes this binding butter and press a board better than it should for such an aggressive design.  All Union Bindings do a pretty good job here getting a little more natural feel underfoot.

Boot Support: The support is about middle ground here. So the ankle straps are of the new breed and a nice improvement over the old thin ankle straps but they still allow you some freedom of movement. It gives you a little bit of both.  If you aren’t into the Locked in or firm hold you mainly get with Burton or Flux bindings you might like the extra freedom that Union provides if you want to tweak out a grab on occasion. Union has 1 or 2 different strap options at C3 here so if you don’t like the straps you can get a different one.

Ratchet System: The Ratchet system is great around the ankle but the toe strap in the past has caused issues with some riders.  The toe ratchet on the Factory is better than the older toe ratchets.  It only takes 7 lbs of pressure to release where the older toe ratchets took 10 lbs. Even Peter who often complained of a sticky toe strap any time he rode Union bindings had no problems.

Shock Absorption: Excellent here as well.  This super padding gives the board underfoot an extra shield from uneven terrain that almost everyone has to encounter.  It’s also one of the top choices for a binding that I’d like to make an awkward or flat landing on. This binding allows you to ride longer and reduces fatigue that comes from on the mountain and in the backcountry.

So all in all this is a good binding for those that want more padding but don’t want to sacrifice much or any response.  This will be fun for the rider that likes a versatile but responsive binding for boards that take a little more work to turn.

Unions Toe straps can be a bit sticky. For some this is a big problem and for others it’s not that big of a deal. Until Union addresses this issue here are some pointers on how to make the toe strap less sticky so you can enjoy the bindings better qualities.

We try to get as many images of the Union Factory, but forgive us if they're not all there.

I am honestly taken aback by these bindings. I have had well over 60 days on them because every time I try to "upgrade," I just end up throwing these back on. I have tried Union Force, Union Contact, Burton Cartel, and Now Yes Team bindings, and these are still my personal favorite. I have the solid black pair and have grown to love the simplistic look; it fits this binding, simple but very high quality.

This is for the 13/14 model in size M/L that I rode for a week at last season's end. Was intending get Burton Cartels but they were sold out so after a bit of research bought these.
As thegooodride review says, there's not much adjustability but it's probably enough, once I got set up I didn't really worry about it, and maybe in itself it's a good thing that I'm not always having to worry about micro adjustments and just get on with riding. My Burton Imperial size 11 fitted perfectly in the baseplate but I found the straps were at their limits with both in the last adjustment holes. The toe strap is fine: it holds well and I can ratchet down to the recommended last 3 or 4 teeth on the ladder. The ankle strap is way shorter than Union recommends to adjust to (I've got about 10 to 12 teeth showing under the ratchet) but is at least centered and not uncomfortable... I have ordered the L/XL ankle strap to use for next season though. All the ratchets work fine and fit and finish is good. I did need to tighten up a couple of bolts on daily checks through the week.
But minor sizing and adjustability issues seem to have little bearing on these bindings perform - in a word, outstanding.
I've come from using older Burton Custom and Mission bindings and just did not expect the huge performance upgrade in performance from 'just' some bent plastic and metal. These are my first pair of canted bindings and it made a massive improvement to my riding comfort and feel. I don't understand why this isn't now standard (or at least optional) on all bindings.
The best thing about these is amount of response combined with the level of cushioning, as thegoodride review states. I have a fairly stiff board (old camber Lib Tech Dark Series MTX Wide) that needs to be driven and the bindings had it under control without issue. Edge to edge it was quick but there was enough feedback as well as cush when I landed jumps. This would seem a difficult trick to pull off but with the Factory, Union seems to have done it.
Definitely one to consider for anyone looking for a cushioned and responsive binding. I'm blown away by this upgrade to my gear and have no buyers remorse whatsoever, really pleased I got them.

This binding is a great combination of comfort and response. The canted footbeds help ease the stress on my 33-year-old knees and joints. I feel great after a long & hard day of riding.

I've only had 21 days on the Union Factory. But the quality materials not only look good, but also have the feel of durability and longevity.

I weigh 200 lbs and ride a wide duck stance of 15 degrees on both feet. This is my 4th pair of bindings in 4 seasons and I can finally say that I've found my ideal setup for my style of primarily free riding. I have previously ridden the 2011-12 Union Force and 2012-13 Union Contact Pro.

I've been able to ride more aggressively and have more confidence on high-speed charges down the mountain. The heavily-padded footbeds are a great damper for rough terrain and for landing jumps.

The new ratchets for the 2013-14 Union line are now easier to unbuckle and I would say that it will satisfy & appease some of the previous complaints of difficult removal.

These bindings fit comfortably with my 2012-13 Thirtytwo TM-Two boots.

I opted for the Asadachi color for its simplicity and understated good looks.

I highly recommend this binding!


product 0.3
4.7 5.0 3 3 I am honestly taken aback by these bindings. I have had well over 60 days on them because every time I try to "upgrade," I just end up throwing these back on. I have tried Union Fo Union Factory 2014-2015 Snowboard Binding Review