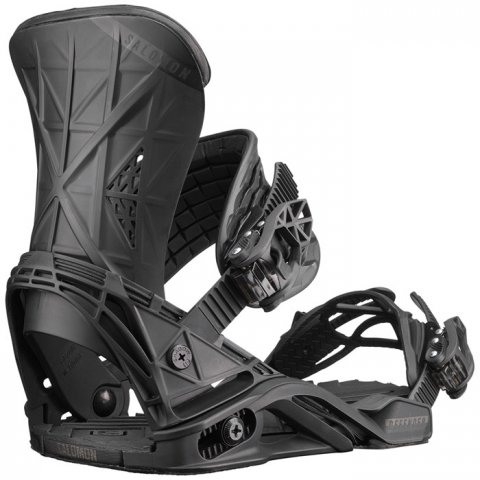 The Salomon Defender Snowboard Binding is new for 2015 and it’s got a slight step up in terms of response and support from the Hologram.  It makes for a good all mountain binding.

Adjustability: Same Salomon adjustability that has a shared forward lean and high back rotation.  You can’t rotate the high back without adding some forward lean which sucks but with the flexy heel loop, it’s not anywhere near as important as it is with a traditional heel loop.

Turn Initiation: There is definitely more responsive than the Hologram and it’s a little less than the Quantum.  It’s got more edge to edge power for boards that are medium to semi-challenging than the Salomon Hologram.

Buttering: Now the Hologram has a slight advantage here but it’s still got butter leverage that’s very close to the Hologram and Defender.  They are all varying shades of good.  I’m not sure how but it works but it does.

Boot Support: You would think that your boot would feel unsupported and exposed but never once have any of us felt that with this flexy heel loop.  Even though you have a lot of range of movement compared to a traditional heel loop you still feel very supported.  It’s not locked in like a stiffer flux binding but it’s amazing how the binding allows both ranges of movement and support.  Usually, you can’t have one without the other.

Ratchet System: Same solid ratchet system as the Holograms.  It’s not the best we came across but its not anything that every causes problems.

Shock Absorption:  It’s not super cushy but it’s got enough to make a bad/flat landing ok as well as deal with chunder well. I’d like to see more of the heel cup removed to allow more EVA foam or whatever is in there now so the sides of your boot arent touching that part.  Still, it’s on the better side of the shock absorption spectrum for sure and the mellow cant helps with body alignment for less fatigue/stress on your joints.  Well for most it does.

So, all in all, we are all fans of the Defender and feel it fills the hole between the Quantum and the Hologram.  it makes for a much more recommendable all mountain binding as most want a little more response in this category. We kept going back to the Salomon booth to get this binding at the demos.

We try to get as many images of the Salomon Defender, but forgive us if they're not all there.