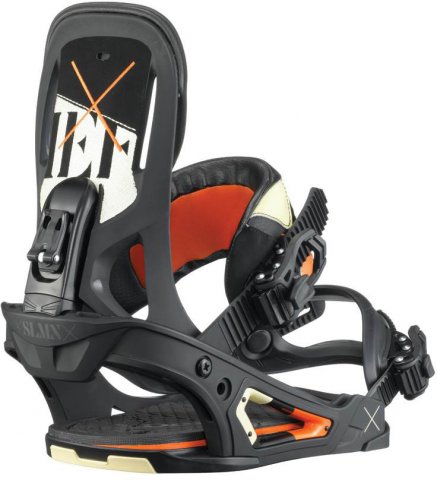 The Salomon Chief is very similar to the Caliber but with just a little less tech and a little more weight. It’s a great choice for any aggressive all mountain snowboarder.

Flex: Love the stiffish high back when I’m in the mood to ride a stiffer board.  It doesn’t twist much and doesn’t have much give pulling back either.  If you called it stiff I wouldn’t disagree.

Adjustability: You can fit this binding around your boot pretty well but it’s not really the pillar of adjustability but the straps are really adjustable.

Buttering: Kind of the opposite when it comes to buttering and it’s a little bit dead underfoot compared to many bindings out there these days.

Boot Support: The ankle strap offers up pretty good support but I personally liked the old Caliber ankle strap better when it comes to supporting.  Love the toe straps with Salomon’s bindings and they really fit around the toe.

Shock Absorption: The plastic EVA foam combo makes for a very damp ride but the shock absorption is just mid-level.

So, all in all, it’s not a bad binding and a good fit for those that like a traditional mid-2000’s feel for more responsive boards.

The 2014 Salomon Chief is pretty much the same as 2013. With the Caliber discontinued we would have hoped the Chief would have inherited the bigger asymmetrical contour fitting ankle strap but it didn’t happen.

For 2013, not much has changed with the Chief. We’d like to see a similar ankle strap for the 2013 Salomon Caliber but it’s still a good binding.  The Chief is in a pretty competitive price group that competes with many excellent bindings out there but its aggressive riding style can work for many.

For 2012, the Chief has a cant in the footbed which makes for an easier ride on your ankles, knees, and hips. It also puts more pressure on the outer part of boards that have a rocker or some type of hybrid shape.

For 2011, there were some minor adjustments to the base plate to slightly improve performance, but the most noticeable change is that the straps have been changed.  The ankle strap is softer and the toe strap is hollowed out in the center to fit better over the toe.  This new tech isn’t a deal breaker over the 2010 model but 2011 is definitely better.

We try to get as many images of the Salomon Chief, but forgive us if they're not all there.

Ride on a Salomon Mans Board and makes a great combo for piste and off. Will buy these again.

I have used these bindings on the following boards: NS Cobra 161, NS Proto 157, NS Wide series 158 and GNU Billy Goat. I'm currently using them on the Billy Goat which I think is where they will stay because it is about the perfect match. I like a slightly wider stance and the canted footbed makes this stance very comfortable...much more comfortable than any other binding I've tried. The toe strap is a fantastic design...it doesn't come off completely so you just zip it out and flip it forward..very simple. The binding is very adjustable and great for landing jumps even when landing flat.

My only complaint is that they ladder strap for the ankle is way too short. I can barely catch it with the latch to get it started and I have a size 10 1/2 boot in a large binding. My friend with a size 12 can't even use this binding because of the short strap. I know I can replace it but it just seems silly that they didn't put a longer one in there to begin with.

Overall, I highly recommend this binding. It works best with the stiffer boards...I didn't like it quite as much with the more park oriented Proto. Thanks to the Good Ride for recommending this to me. An excellent suggestion once again...you guys sure know your equipment.

product 0.3
5.0 5.0 2 2 Ride on a Salomon Mans Board and makes a great combo for piste and off. Will buy these again. Salomon Chief Binding Review And Buying Advice