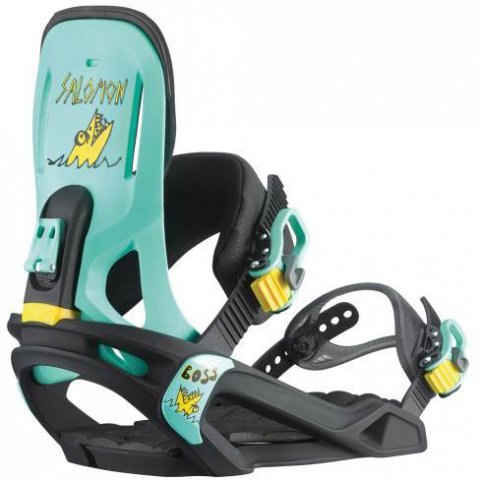 The Salomon Boss is another binding that has a similar set up to the all mountain style of the Cypher but has a much softer beginner flex.

Adjustability: Missing that good adjustability in the straps.  It does not loosen the screw, slide and then screws back tight.  You have to take the screws all the way out.  It’s got a little bit of tech to size the binding to the boot but not as much as most.

Comfort: It’s comfortable for its price range.  The ankle strap and toe strap fit around the boot well without causing pressure points for most riders.

Turn Initiation: has a decent response but it’s nothing special.

Buttering: Kind of dead underfoot.  You will need a softer board with this base plate to butter well.

Boot Support: gives you a lot of freedom of movement which is good for the park

Ratchet System: Lower end ratchet system but at least it works.  Would much rather have the Defender’s ratchet’s on.

Shock Absorption: The base plate is hollow at the heel with plastic and EVA combo makes for ok shock absorption but it’s nothing to write home about.

All in all this binding is very average and there are others in this price range that had more appeal to our crew. This will work a seasoned rider who loves Salomon and doesn’t want to shell out a lot of cash or an entry level rider that can get a deal.  2014 and 2013 are pretty much the same.

We try to get as many images of the Salomon Boss, but forgive us if they're not all there.

When i started riding this binding felt great, especially with salomon boots that lock in well around the toe. As my progression grew (jumps, jibs, deep powder, blacks) the bindings held me back, the baseplate comes loose if you push it to hard (after about 10 park/ black/ powder runs), in the form of rotating about 15 degrees each way, and the heel cup doesn't grip strong enough to hold your heel in on a hard carve. If your buying a cheaper pair of bindings for a young kid (10-15) these a great, but as soon as they progress get them into something more sturdy before there foot slides off the board, binding and all (happened to me twice in 10 days on the mountain)

product 0.3
2.0 2.0 1 1 When i started riding this binding felt great, especially with salomon boots that lock in well around the toe. As my progression grew (jumps, jibs, deep powder, blacks) the binding Salomon Boss Binding Review And Buying Advice