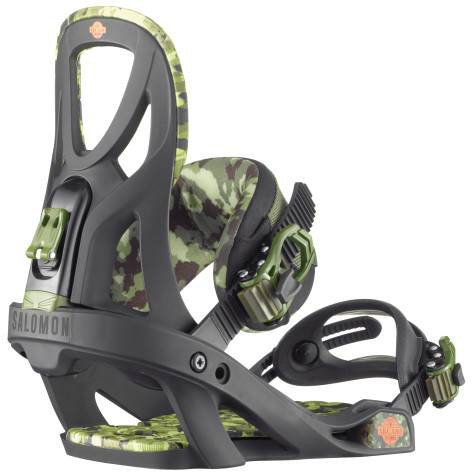 The Salomon Arcade is a very solid binding for those that want a binding with a flex similar to the Salmon Code, but that’s about it.

Flex: The Arcade has a lot more freestyle tweak-ability, but it still has enough to do okay with a mid-flexing board on the hill.

Adjustability: You have a toe ramp, some ankle strap angle but it’s not that adjustable.  However, Adjusting the toe strap or ankle strap is super easy and we love this tech.

Comfort: Nothing great but also nothing to write home about.

Turn Initiation: Not much going on there in terms of response. Kind of mellow and forgiving.

Buttering: Pretty dead underfoot so you need to pair this with a soft board if you want to butter a lot.

Boot Support: Pretty good ankle support with enough room to tweak. Love the Toe Straps on the newer bindings. They really wrap around the boot well and help increase the support.

Ratchet System: We are ok with Salomon’s ratchet system but it’s not the best out there.  It works well enough and we haven’t had issues yet.

Shock Absorption: The base plate is much lower to the board than the Code line and the shock absorption is borderline rough. This line of bindings is very much skate focused so it will work for some and not for others. Not very forgiving with bad landings and doesn’t do much to dampen the board when dealing with mountain riding.

For 2012, not much has changed and this is still a good binding for those that want a more skate-style binding that is pretty supportive.

The Arcade in 2011 has new straps that make for a better fit over the toe and a more comfortable ankle strap.

We try to get as many images of the Salomon Arcade, but forgive us if they're not all there.