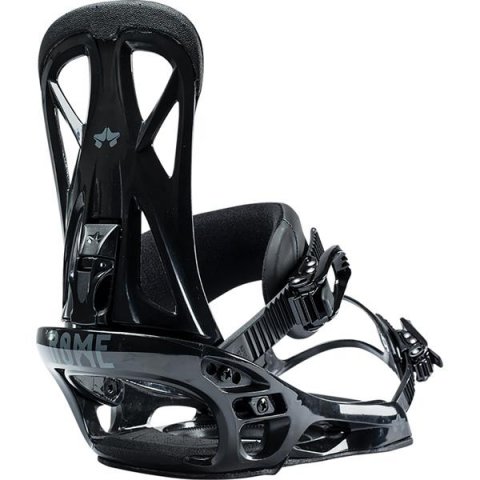 The Rome United is one of Rome’s all plastic/fiberglass snowboard bindings. Rome United is a step up in quality and performance from the Rome Shift.  It’s no Rome 390 but it’s a lighter binding and it’s not that bad for the price.

Flex: It does have its own unique high back that is pretty soft compared to the others in Rome’s line.

Adjustability: Not bad adjustability.  It’s got enough to tweak it a little bit to make sure you have set for your boot size.

Comfort: Very comfortable and I liked how it fit around my boot.

Heel-Toe Response: The Shift has smoother, a softer response that will do a good job for beginners, intermediate riders who want more comfort than the Rome Shift and people who like to have flexibility in their bindings at almost any riding level.

Tip-Tail Response: The United has a base plate that creates a dead spot underfoot but at least there is minimal contact with the board.  They tapered up the sides and you can feel that allow the board to flex pretty easy underfoot.

Boot Support: The United has a nice strap similar to the 390 and practically the same base plate as the Shift.

Ratchet System: It wasn’t bad and it had an ok glide but I’m not sure how well it will do in the long term.  Doesn’t feel as bad as Ride’s low end ratchets.

Shock Absorption: Not much going on here. It’s a very minimalist plate and there is some EVA foam but not that much.

Not much has changed from 2010 to 2015.  The Ankle strap is always a little different but the feel and flex are the same.

2010- The United did have a problem with the first wave of bindings made in 2010.  The base plates were cracking and so Rome issued a recall.  Everything is fixed now and Rome did step up to take care of everything which is better than most companies out there.

We try to get as many images of the Rome United, but forgive us if they're not all there.