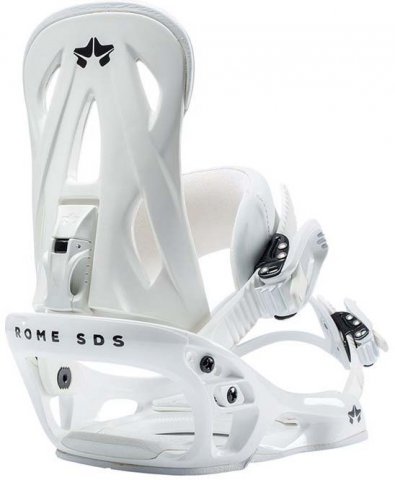 The Rome Shift is a simple, soft, forgiving low-cost binding that is a low-end United. It’s nothing special but it gets the job done for anyone getting to know the world of snowboarding.

Flex: Nice med/soft flexing high back that has some tweak-ability and won’t make the ride twitchy.

Adjustability: Decent adjustability.  You can do a little to dial it out to fit around the boot you own.

Comfort: Not super comfortable but definitely not uncomfortable.

Heel-Toe Response: As I said before there is a nice smooth response that isn’t twitchy so it’s good for a beginner who is prone to make mistakes when turning.  So nice forgiving response.

Tip-Tail Response: The base plate is dead underfoot but it’s got minimal contact where it’s dead so you can butter ok

Boot Support: The ankle strap is a little less cash and the long term reliability is a bit questionable.  It’s not that bad though.  However, I’m not super into the toe straps Rome has lately.  They pinch the sides of the toe of my boots and

Shock Absorption: Not much going on here and it’s not s super damp ride.  Also

If you progress quickly then you will get tired of both of these bindings.  If you only get up a few times and want to be free of the rental store the Rome Shift is also a good choice.

The 2010-2014 Rome United models haven’t changed much. The material in the ankle strap is always a little different but the base plate and high back have been pretty much the same.

We try to get as many images of the Rome Shift, but forgive us if they're not all there.