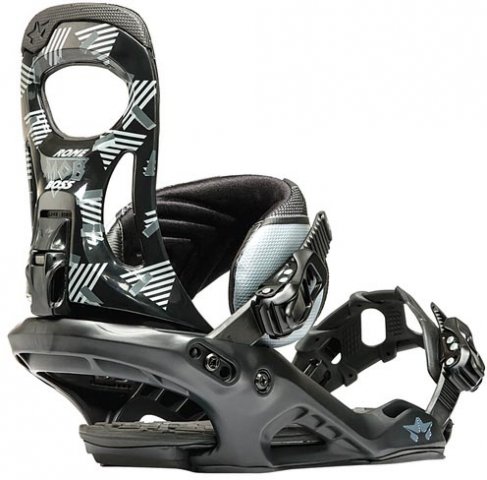 The  Mob Base plate is canted like the 390 Boss and Rome Targa.  The base has an advantage over the 390 because you don’t have to remove both the heel padding and toe padding sections to take the disc off the board Instead you just have to pull out the toe pad. It also comes in three sizes instead of 2 so you don’t have to fuck around with adjusting the 2 part metal of the 390 which sucks because it’s very difficult. The Mob also has fewer parts so, in theory, it’s less likely to break than the 390 and Targa. The slightly asymmetrical ankle strap is almost the same as the 390 and we like this strap.  The Mob is a pretty responsive well rounded all Mountain binding.

Flex– The Mob has an overall medium flex but the high back has a variation of flex’s from top to bottom.  The top is pretty soft but as you go down the high back it gets stiffer. It’s a little taller than most high backs as well so there is a little more leverage.

Adjustability: Very easy to adjust to your riding style and boot.  This is a refreshing change from the 390 and Targa’s. They are a pain to get adjusted but the Mob is almost like most normal bindings.  We know it’s a little more expensive but we’d like to see the Boss Base Plate design on the 390 series and the Targas.  It would cost more but make for much better user experience when it comes to adjustability.

Comfort: Once properly adjusted the comfort factor is top notch.   The ankle strap is supportive and pressure point free just like the Rome 390 Boss.  The 2013 toe strap is a little bigger and more supportive than the toe strap from the Rome Mob of 2012.

Response– The new base plate seems to be as Rome describes but you can be disappointed if you expect a mellow park binding. The flex feels all mountain  The edge to edge transitioning on this binding is exceptional. At first, we paired the Mob and Mob Boss with mellow boards but we found they were better for us with medium flexing boards.  Rome says this is in the middle ground of response but we felt it was more on the side of Excellent

Weight– Pretty light but it’s not a featherweight.

Lateral Movement– Pretty easy to get a board to flex laterally for butter or ollie.  This is great for those that are more into the edge to edge transitioning but also like to mix it up and butter the board around.

Dampening– The Mob is super damp and chatter free. We were expecting average here but got excellent.  Not bad Rome!

Shock Absorption– The entire footbed is pretty cushy.  The only part that doesn’t have a tremendous amount of EVA foam is the part that covers the disc.

Board/Boot Integration– This binding works well with most boots and a lot of boards.  We felt it was more responsive than we expected and that made us feel this was better with Medium to Med/Stiff boards than softer boards but it’s all personal preference.

We try to get as many images of the Rome Mob Boss, but forgive us if they're not all there.

I bought my first snowboard in 2013, and these were my first bindings. I've ridden them VERY hard during the 2014-15 season, and they've seen their share of bone-jarring, edge-catching, end-over-end landings and smashings. As promised, they absorb shock well and are very comfortable in a huge range of riding conditions, from ice to powder - that I can say with great certainty. Not having owned many bindings, I can't compare them with other bindings in terms of build quality or responsiveness, but when I managed to crack a highback while getting on a lift, Rome replaced the part and also sent me new footbeds just for the heck of it. I look forward to replacing the old footbeds when they wear out. The only problem I've noticed so far is that sometimes on a warm day the ratchets ice up and won't engage after a cold lift ride. This basically forces me to massage and blow on them a bit to get rid of the ice before strapping in, which is a major pain, of course. Other than that, I like them, and they seem to use higher quality materials than the other bindings I've experienced so far.

First day I used them the heel strap broke 2hrs in which pissed me off as it ended my day. Haven't let me down since but won't recommend as a result. Have owned Union, Ride & Technine bindings and have not had a similar breakage before.

When I first received these bindings and tried setting them up on my K2 boards, they could not screw in, which was a result from poor build quality as they had not aligned the underside base rubber material with the disc hole. This made one side of the base plate higher and the screws could not screw in. So I used a knife to cut away the rubber which was not aligned properly, which fixed the problem but took much time and effort.

I rode the 2013 Mob Boss and having read up about the strap snapping on some other reviews, so I bought my backup pair of Union Atlas (2013) along. The Mob Boss bindings have great cushioning along with the optional Canted foot-bed. However, I found the straps to be too short in both the toe and heel despite having adjusted them. This made it very difficult to strap in. Perhaps it was my Kaiju's but it shouldn't be the problem as my Union Atlas strap in fine every time. Overall the bindings are good. The ratchets release very quickly and easily compared the the Union Atlas which is great, but I just wish they had made the straps a little longer.

Bought these bindings (2013 version) in March (almost end of season) together with a Rome Anthem 161.
First day out I noticed the lean block on one side was gone after just a couple of rides. Being disappointed I try to strap in at the highest point in the resort, and the heel strap snaps. I was probably a bit excited and put my foot in to fast, but still.
My previous bindings were Raiden Raptors and that has never happened with them.

Other problem is the seizing of the bindings. I've Salomon Synapse (Wide) boots in size 9, which puts them in the middle of their seizing chart for a size M. But the boots will barely fit with especially the toe straps at the last, or before last fixing point. Not comfortable nor easy to strap in!

Positive points of the binding are their relative low weight and the neoprene can cooler (if you like that kind of BS!). But I prefer my old, heavy Raptors with don't break after even 4 seasons. Warranty was ok, handled directly by Rome. They send me the replacement parts by post after having send them a couple of photos. I got no serious response regarding the seizing matter.
All in all, quite a disapointment.

product 0.3
2.5 4.0 4 4 I bought my first snowboard in 2013, and these were my first bindings. I've ridden them VERY hard during the 2014-15 season, and they've seen their share of bone-jarring, edge-catc Rome Mob Boss Review And Buying Advice