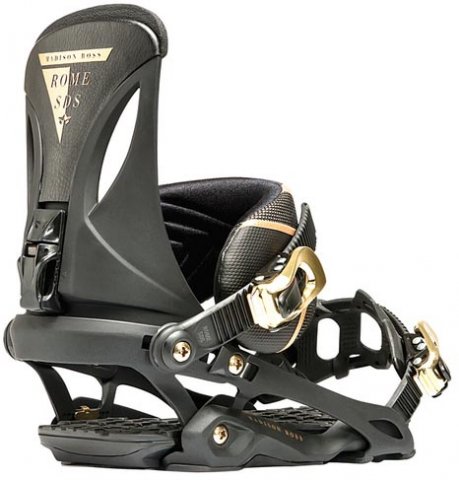 The Rome Madison Boss use to be the Rome Madison but last year it became the boss.  is a very well made binding that appeals to a large variety of riding styles.  The Madison takes a similar design to the Rome Strut but it’s much softer and more smooth of a ride.  The Madison also has a very different freestyle/all mountain oriented ankle strap that allows more freedom of movement.

The 2014 Rome Madison Boss changed things a bit this year.  The general ride is the same but some long need usability improvements have been made making this the best call over all the years.

1. The new base plate that is the same as before in terms of the ride but it’s just easier when it comes to adjusting the binding to your boot size and there isn’t a rubber flap that comes off easily now.  the rubber is permanently attached which is good.

2. The new footbed that is much easier to get on and off because it’s one piece and has one screw.

3. The canting system options are easier to switch out as well.

4. There is also a better ankle strap.

The overall ride is pretty similar but now everything is easier to work with so it makes the 2014 Rome Madison Boss a much better call over all the other models.

2013 added “Boss” to its name and also the canting technology that the men’s boards have which is good!. The Rome Madison is a pain to get dialed out for your boot size but once it’s done you shouldn’t have to do it again. It has a smooth response that isn’t too sharp but also isn’t too dull.  All in all, this is a binding that will work with many boards, boots and many riding styles.

For 2012 not much has changed.  The ankle strap has the same design but has a more sleek look compared to 2011.

For 2011 the Rome Madison went the way of the top men’s bindings and this has some distinct advantages over 2010.  The base plate has been hollowed out at the nose and tail to allow for more cushioning, lighter weight and a little better response.  The extra cushioning is the best part of the new base plate.  Most bindings over time screw up the top sheet but Rome minimizes the damage with rubber that runs along the bottom. It also makes for a little more damp of a ride. We’d like to see a cant option for the Madison like Rome has with the men’s.

We try to get as many images of the Rome Madison Boss, but forgive us if they're not all there.