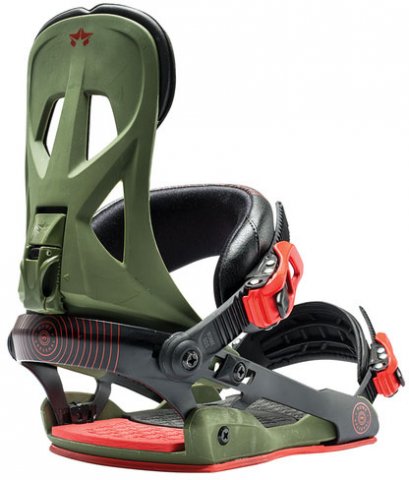 The Rome Arsenal is one of the forgotten bindings in Romes line.

Flex: The high back is pretty stiff if you twist it and especially so if you pull it back.

Adjustability: The one issue with the Rome Arsenal is it’s not easy to get everything dialed out. The biggest pain is adjusting the bindings to your foot size and because there are only 2 sizes it makes sense to do so.  Many other bindings have 2 sizes but the adjustment is in the heel loop.  You have a metal piece connecting to a metal or plastic piece that isn’t easy to align so you can get the screw in.

Comfort: Not a fan of the toe straps because like ride bindings they tend to collapse the sides of our boots and make it a bit uncomfortable.

Buttering: Kind of dead underfoot if you want to butter.  It’s still got the old base plate that the 390 and Targa’s use to have and it’s been around for a while.  Back in the day, it was a fine base plate but these days it’s pretty old school. It feels like it made the boards I rode with it stiffer than they were.  If you like that kind of feel then this is a good choice.

Boot Support: Decent support but you would think that a pretty med/stiff high back would have a more supportive ankle strap.  Still, it locks in your boot pretty good.

Shock Absorption: Not a lot of shock absorption going on when you compare these to the Targas.  Damp at speed but not the best for handling an unfortunate landing.

The Rome Arsenal is a decent All Mountain binding at a good price but it hasn’t really changed much in terms of design over the years we have reviewed this from 2011 to 2014. In 2011 Rome added the 390 high back to mellow out the stiffness.  Boards aren’t as stiff so the old stiffer Arsenal isn’t needed as much as it used to be.  So anything, before 2011 is going to be stiffer and more, freeride focused and the new 2011 will be closer to the All-Mountain side of things.

We try to get as many images of the Rome Arsenal, but forgive us if they're not all there.

Absolutely Love them. They are stiffer, but very well balanced overall bindings. Love the quick adjust system on the highbacks and overall ease of manipulation with those as you do not even need to take your gloves off. Once they are mounted on the board they have multiple options for adjustability. They look and feel good on my Burton Custom board.

So many issues with these. I got them because the shop told me they had a lifetime guarantee. Toe strap broke day 3, heel strap sometime after that. Foam on the high back perished. Vinyl peeled off so the foam got soaked. Now, for no apparent reason the metal baseplate snapped on both sides while riding in powder. Wrote to Rome and a week later still waiting to hear back.

product 0.3
3.0 5.0 2 2 Absolutely Love them. They are stiffer, but very well balanced overall bindings. Love the quick adjust system on the highbacks and overall ease of manipulation with those as you do Rome Arsenal Review And Buying Advice