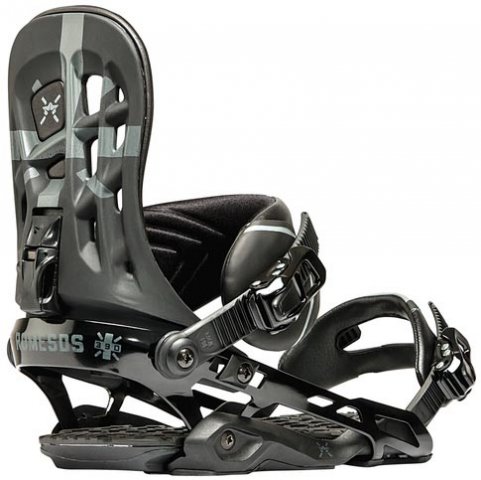 The Rome 390 appeals to a very wide variety of riders and riding styles. The only difference between the 390 Boss and 390 is the 390 Boss has canting options and a different toe strap. Our only complaint is that they are many parts and the binding is hard to adjust to your foot size.

The 2014 Rome 390 bindings have the same ride but they have improved lots of annoying construction issues in the past.

1. You can now dial this binding out for your boot without going bat shit crazy. There is a sliding system to adjust the heel loop were before you had to remove screws and it was a nightmare putting them back in because the under wrap heel loop wasn’t always perfectly aligned. It drove me mad a few times.

2. The rubber padding on the bottom is now permanently attached where before it used to always come off when you were trying to mount the binding.

3. The EVA footbed of the base plate has been changed to a uniform base plate instead of a 2 piece base plate that didn’t look too sturdy.

Flex– As we say above this is a medium flex that is compatible with a wide range of boards and boots. We all felt it was more on the soft side of medium but supportive and pretty responsive.

Adjustability: The one issue with the Rome 390 is it’s not easy to get everything dialed out. The biggest pain is adjusting the bindings to your boot size.  You have a metal piece connecting to a metal or plastic piece that isn’t easy to align so you can get the screw in. This was incredibly frustrating to us and took us almost an hour to get both bindings dialed out.   Also when there are a lot of parts there are a lot of possibilities for those parts to break.  We have to say though that we haven’t had any issues but the writing is on the wall.  It’s also not easy to change from one board to another. You have to take off a small screw on the top, remove 2 pieces and then un-screw the discs.  For us, it was a pain in the ass to change these bindings from one board to another but for the average rider, it won’t be terrible if you mainly keep them on one board. The 2014 Rome 390 is for sure the call for the reasons mentioned above.

Comfort: Once you get the bindings set up these are some of the most comfortable bindings out there.  None of us experienced any pressure points even when we cranked them super tight. Also, the new canting system makes a big difference when it comes to keeping your hips, knees, and ankles better in line with your body.  I (editor) have bad hips from too much hard living and when I’m done with a day of snowboarding they can get tight. When using the canted system they feel much better when getting off the hill.  You see the canted trend increasing across the binding world and I really like this.  The rest of the crew liked the cant but I liked it the best for obvious reasons.

Heel to Toe Response: The response is good for what Rome sees as a freestyle snowboard binding. We see it more as an all mountain do anything type of binding and it can handle a soft continuous rocker snowboard as well as deal with even a moderately stiff camber board.  edge to edge response with the 390 and 390 Boss is very good for its flex and design.

Approximate Weight The Rome 390’s are not light.  We don’t really put any binding on a scale and can be wrong but the 390 Boss and 390 seemed heavier than the other bindings in their class.  The 2011 and 2012 models are a little lighter than 2010.

Tip to Tail Response: The new ankle straps for the 2012 and 2011 models give a little more ability to flex the board laterally a lot better than the 2010s.

Shock Absorption: 2011 and 2012 have superior shock absorption and some of the best in the industry.  The addition of EVA foam throughout the entire base makes for a very friendly ride when making that awkward flat landing. 2010 was pretty good but it doesn’t hold a candle to the 2011 to 2014 models.

The Rome 390 is a great binding for all kinds of riders and if you can live with the adjustability issues you might have a binding that will make you very happy.

The Rome 390 SDS has been the Burton Cartel for Rome’s binding division.  After riding the 2010 and below model and now riding the new re-vamped 2011 and 2012 model we have to say that the 390 and 390 Boss is a solid choice for riders of all styles. Our only complaint is the amount of parts and how difficult it is to adjust the bindings.  When you have a lot of parts you have more chances for something to break.

In 2011 the Rome 390 had an overhaul from 2010.  The base plate has been completely changed from last year.  The toe and heel part of the base plate have been removed and replaced with EVA foam.  Rome also added a more asymmetrical high back to interact better to the way you stand on the board.  The Rome 390 Boss takes it a step further and gives you the option for multiple canted high back angles. This increases leverage on the outer edges of the board as well as aligns your body better with the board. The 2013, 2012 and 2011 share everything except for the paint.

So let’s get into the detail of the changes that happened in 2011 and that are still in place for 2012. First off the ankle strap seems to be softer and a little more flexy.  Second the high back is new. The old symmetrical high back now sits on the Rome Arsenal and the 2011 high back is asymmetrical.  This is a pretty big change that is very similar to the latest tech that many companies are using now.  The biggest change is the entire re-construction of the base plate.  Both the front and back of the base plate have been hollowed out to have EVA foam and some sort of plastic to create a better flex in the board and a much more shock absorbent foot bed.  This is done by creating two halves that merge together in the middle with one screw. The foam is medium density so it looks like it can keep response but also handle a flat landing.  The one thing we were a bit worried about is the plastic that holds the 2 footbeds together seems a little weak for something that is going to be continuously stomped on by feet holding the weight of your body.  We’ll see over the long term. The 390 Boss has a canted footbed that creates an angle so your boot will align correctly with your body.  It also creates a little leverage on the outer part of a rocker snowboard so you don’t have to ride like a bow legged gorilla who needs to take a crap.  If you are riding a rocker board or what to be more aligned then the 390 Boss are probably the way to go.

We try to get as many images of the Rome 390, but forgive us if they're not all there.

Been using this binding the last two years and they've held up great.
Great style and look to them, and very well made. Feel sturdy and solid. A bit heavy but besides that all around a great buy.

product 0.3
4.0 4.0 1 1 Been using this binding the last two years and they've held up great.Great style and look to them, and very well made. Feel sturdy and solid. A bit heavy but besides that all aro Rome 390 Review And Buying Advice