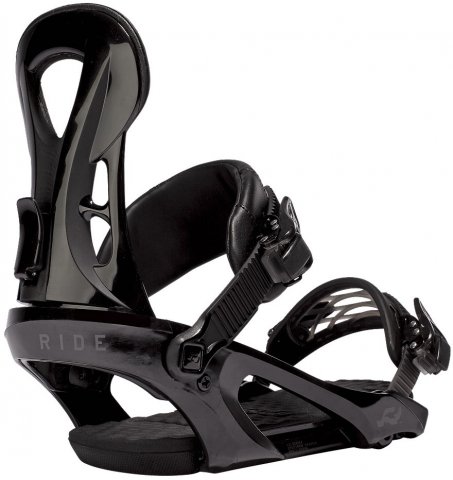 The Ride LX Snowboard Binding is a decent beginner binding with some average tech but also with some ratchet issues.

Flex: Not a bad flex that’s kind of on the soft side making it pretty forgiving.

Adjustability: Not much adjustability here.  Pretty much plug and play with only a few adjustment options.

Comfort: There is nothing bad about the ankle strap for most riders and as long as you don’t crank it there should be no pain.  The toe strap collapses the sides of my boots and it’s a bit uncomfortable.

Heel-Toe Response: A nice smooth response that isn’t bad as long as you aren’t pairing it up with an aggressive turning board.

Tip-Tail Response: It’s nothing special here but it won’t hinder a boards ability to butter or press.  It’s just not like a lot of newer tech that has better flex underfoot.

Boot Support: There is decent support but still enough room for movement if you want to learn how to tweak it in the park.

Ratchet System: One of the only issues with these bindings for those looking to get into the sport.  They are better than they use to be but still not that good when it comes to reliability.  There is nothing worse than being a beginner and having your ratchet break. It often means that you are going to have to figure out a way to get down the mountain without a toe strap or much worse without an ankle strap on.

Shock Absorption: There is a good amount of padding in the heel that allows you to knuckle a kicker without as much consequence as without that heel padding.

Overall The Ride LX is not going to be a good purchase for riders that want to really progress but if you want a binding that will work rather well with soft beginner snowboards then the Ride LX won’t be a bad choice.

There is one major change from 2011 to 2012 that isn’t that great. The LX changed the ratchet system in the ankle and toe strap.  The new ratchet system is sticky and looks like it might break very easy. This is why we strongly recommend the 2011 or below.

We try to get as many images of the Ride LX, but forgive us if they're not all there.