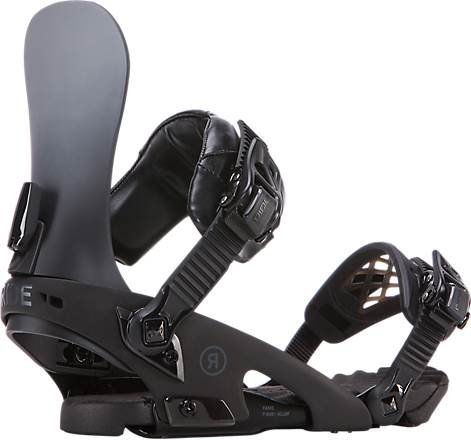 The Ride Fame is new this year but has many characteristics of the now discontinued Ride Sigma Movement.  This is one of the only bindings that received Rides new tech. Back in 2012 Ride added a lot of new tech to their line and have a lot of new bindings but only the Fame received the full force of this new tech on the women’s side.

The Ride Fame is deserving of a new name because it has a new high back and new chassis.  We also like that Ride added the 2 hole plate for Burton EST boards which make this binding more appealing to a wider variety of boards.

Flex: The high back is pretty easy with the torsional flex but a little stiffer when pulling straight back.

Adjustability: All ride bindings are very easy to adjust and this is no exception.  You only need a tool for the disc.

Comfort: Most don’t have pressure points or complaints with how The Ride Fame holds your boot in place.

Heel-Toe Response: The response from the Fame is solid and really makes for great edge to edge transitioning.

Tip-Tail Response:  We also like how there is reduced contact with the board to allow for an easier flex underfoot. The 2014 Ride Fame has a mini disc making it better than in years past. It’s a better edge to edge and a little better from tip to tail.

Boot Support: Not a lot of boot support but a lot of freedom of movement.

Shock Absorption: They kept the super cushy canted footbed tech called wedgie from last year and we like this tech.  It keeps your hips, knees, and ankles more in line. It also helps to create more leverage on the outer parts of these rocker or hybrid shaped boards.

If you are looking for a well-rounded binding that will work well with a wide variety of boards the Ride Fame might work for you. You get a lot for your money and we feel this is a good binding.

We try to get as many images of the Ride Fame, but forgive us if they're not all there.