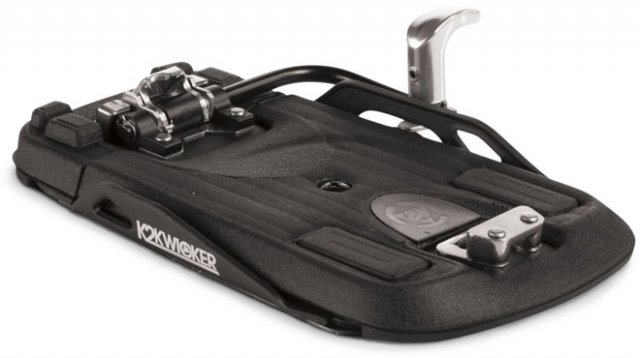 The K2 Kwicker is the re-introduction of the old click in bindings that use to be in K2’s line a while back.  I thought click in bindings were gone for good but they are back. Yes, I’m not amped on this resurgent tech and never liked the old click in system.  Yes, it’s better than the older K2 click in system but you still don’t have the performance that you get with a traditional strap binding and boot. You sacrifice a lot of performance to keep up with your skier friends to own this system. Make them wait an extra 45 seconds so you can have more fun on the mountain on the way down.  You also only have one boot option. Despite my negative opinion of the Kwicker system, I can see how it works for people with medical issues or for people who are willing to sacrifice performance for an extra run or 2 in a full day’s ride.

The Rating system factors in the Stark boot that you need for the system to work.

We try to get as many images of the K2 Kwicker, but forgive us if they're not all there.

Complete Garbage! and K2 too!

Back in the 90's I rented a set of clicker's and a board for a day. I had only been on a board maybe 2-3 full runs before that so I was new. I had a good time and liked not having to sit on my butt and get wet to click in. So fast fwd 20 years later and I'm getting back into winter sports and decided to do snowboard instead of ski this time. I saw these and thought hey those were great when I tried them last and hadn't been on a board since so I bought them and the Stark boots to go with them. Went out, picked up boarding pretty easily and advanced my skill quickly. I was happy with them and enjoyed being able to click in on the lift and just ride off. This was a good thing because if I had any ice buildup in my boot I could get it out while on the lift. Sometimes it was easier than other times. After a season and a half I'm playing around with them in the living room adjusting them and notice there's alot of side to side flex in the front boot. I look down and see that the sole is separating from the rest of the boot! That sucks, it must be a fluke I thought. So I went out and bought another set of boots. While riding the new set I got in touch with K2's customer service. They took my info had me email pics over about 6 emails. Then after asking the size of the boot they ghosted me! Whatever I have a new set and they're paid for so I'll just keep riding. A season and 1 month into riding (now Jan 2020) I'm riding up the chair 1 footed about to click in fully and look down and see the new boots separating from the sole again! I was beyond upset. I went back the store I bought them from looking for help. They called the K2 rep who told them since the boots were over a year old he couldn't do anything.

So 2 boots in 3 years and zero help from K2 I went and rented a set of the Burton Step ons. OMG the difference is amazing. So much more board feel and comfort. I've been able to raise my game some more. I rode the boots hard for the rest of the season which was probably 20 days or so till covid hit. The boots still look brand new. My wife had already had a set we bought at Bachelor when we were there to replace her K2 contour boots and Burton Escapade bindings. Straight to the top of Pine Marten and down like she was still in her old setup. She said she felt even more in control. So I know I'm not missing anything by going to straps and still get the advantages of a setup in/on system. I will NEVER buy another K2 product again just based on the crap their customer service did.