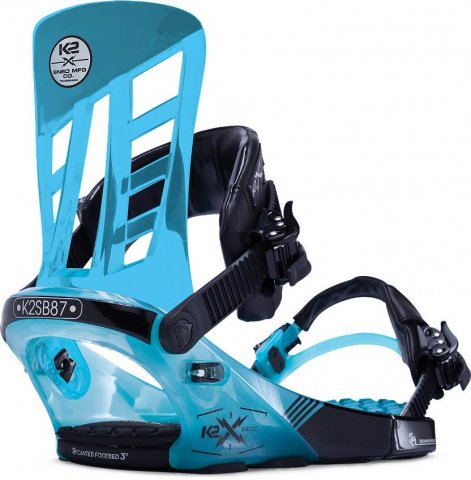 The K2 IPO really impressed with the comfort, smooth response and all around ride.  It’s been way too long since K2 offered a higher end regular strap binding and it’s a welcome addition to the line.  I wish K2 would stop screwing around with the quick release bindings like the cinch, quicker and keep working on developing their traditional strap bindings like the IPO.

The 2014 K2 IPO with its new high back and seriously asymmetrical ankle strap is different than the 2013 K2 IPO but we like both models equally.

Flex:  The K2 IPO has a nice mellow flex. It flexes pretty easy when you twist it and it got some give but it doesn’t feel like it’s all Urethane.  After taking it on the hill we thought it felt medium because the response is deceptively better than it’s flex but it’s softer than we thought in the video.  We like the lighter high back but it seems to have about the same results as the older one.

Adjustability: You are toolless with both straps and both straps are super easy to adjust. You just flip it up and slide it to your desired spot.  No screws or toolless shit going on here. It also seems to hold well.

Comfort: Incredibly comfortable.  Both years were comfortable but I think the new ankle strap is a little more comfortable for 2014. All of us felt like it wasn’t even on which is great and it conforms to all types of boots. The canted footbed also reduces fatigue.

Heel-Toe Response: The K2 IPO gave us more response than we thought it would.  The K2 Slayblade is not a mellow board by any means but it still was doable. Yeah, there are more responsive bindings out there and the sweet spot is more all mountain freestyle to freestyle friendly.  If you like smooth but still want some response for the mountain then you have a pretty good thing here with the IPO. It really turns a wider variety of boards than we thought.

Tip-Tail Response: We had nothing going on with the Slayblade but that is expected but the IPO did pretty well with the very easy to butter K2 Turbo Dream. Its pretty middle ground but you can get a little flex out of most boards that are willing to.

Boot Support: Pretty good boot support on the outside and a lot

Shock Absorption:  There is some harshmellow padding which is like EVA foam or could be exactly EVA but just called something else.  I’m not sure what it is but it does offer pretty good padding across the footbed. It’s not super deep padding like some bindings we have come across but it’s good enough to absorb some shock and it feels very damp at speed.

The K2 IPO takes a lot of techs that you see on many other bindings but did it so well that it makes this a very fun binding to own.

The K2 Company IPO is very well made with a lot of new technology like a canted footbed and very good shock absorption.  This is the binding to get from K2 and despite the Urethane infused high back it has a smooth but rather responsive ride. One of the more responsive Urethane high back bindings we found. We rode this binding with the K2 Slayblade as well as a few other stiff boards and to our surprise had no problem getting it edge to edge.    It feels like an enhanced extension of your boot. We had a pretty good time on this binding and feel it’s one of the best in K2’s line.  It’s also one of our favorites. Even though it doesn’t have any real tech to reduce the dead spot under foot we all had nothing bad to say about the Company IPO. All of us would have no issues adding this to our quiver and would use it often.

We try to get as many images of the K2 IPO, but forgive us if they're not all there.