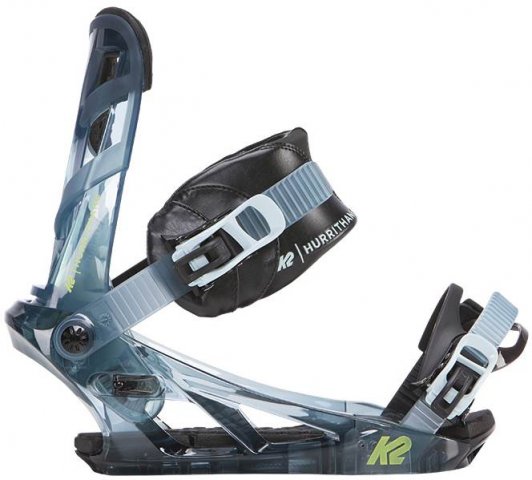 The K2 Hurrithane binding has one of the softest high backs out there to make for a very soft and playful street ride.  The Urethane high back is super soft and flexible.  This isn’t revolutionary and many companies now have Urethane but it’s well made and fun for the rider that likes an ultra flexy feel. Not that much has changed from 2013 to 2015 and it’s still fun but in a mellow way kind of binding.

Flex: Super soft and noodley.  It’s a step below our rating system and almost doesn’t even feel like there is a high back on.

Adjustability: Very easy to adjust and we really like their ankle strap/toe strap system. It’s one of the best out there and it conforms really well to your boot.

Comfort: Very comfortable.  The noodle high back molds perfectly to your binding and the ankle strap don’t cause pressure points with most riders.  Most of us are happier with ankle straps that are more narrow in the middle and wide on the sides but this works really well.

Heel-Toe Response: We all thought this would be tough to get anything edge to edge but it worked the subculture edge to edge rather well and that wasn’t the right board to try these bindings with.

Tip-Tail Response: The K2 Hurrithane doesn’t have any special tech underfoot to eliminate a dead spot but the Urethane in the base plate makes it soft and allows more flex than any other K2 binding. We’d like to see them reduce a shit load of the base plate to eliminate solid contact with the board. The Hurrithanes larger ankle strap helps with a little extra butter power.

Boot Support: Not much support here but that is the point of this binding.  It’s super forgiving and playful in the park.  If you pair this up with a softer boot than we were on you could have a board that feels like a skateboard. Just about as close to a no back as you can get.

Ratchet System: Nothing bad at all but nothing exceptional either. Right there in the middle and it has no issues.

Shock Absorption: There is a good bit of shock absorption going on in the back and it creates a nice buffer between your joints. and the snow.

All in all, this is a really fun binding for those that want a free and easy feel in the jib park as well as other places in the park.

We try to get as many images of the K2 Hurrithane, but forgive us if they're not all there.