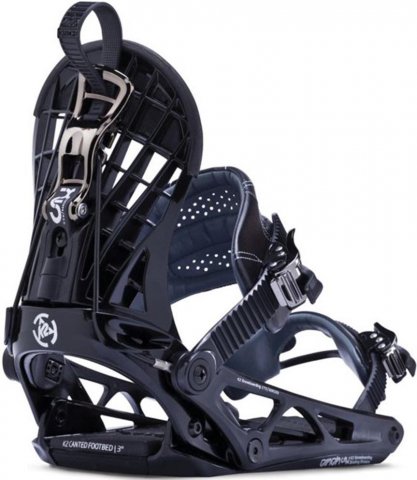 The  K2 Cinch CTX is one of their quick release options in K2’s line. We’d like to see them work on making a binding that has a better response, flex under foot and turn initiation but to some quick release is more important. For those that love quick release then you have the Cinch CTX. Of the now 3 quick release models in K2’s line, we aren’t amped on any type but this is their best version. Often times if you go into a snowboard shop in the summer you will see most of the shops’ bindings gone except for these. That says more than this review can but here I go anyway.

The 2015 Cinch CTX got a new high back that was passed down from the K2 Company.  We like this high back and it does improve the ride a bit.  Also, there is a better and more comfortable ankle strap. It improved the ride a bit and it’s a good quick release binding but it still lacks in all-around performance compared to more modern bindings like their Lien models.

Flex: This old model high back is pretty stiff.

Adjustability: Actually there is pretty good adjustability here in the straps because they are just like the high-end K2 bindings. Also, you don’t have to use the cinch system to ride these bindings. You can get in and out as normal people do. If you use the cinch system it’s best to loosen the ankle strap and toe strap a little so you can get in and out easier. So after putting up the high back, you will have to crank down the toe and ankle strap to make sure the fit is good.  You can keep it loose but then you are stuck with loose fitting bindings. When standing up how I normally put in bindings I felt uncomfortable bending over and reaching around to my heel to lift.  I’d much rather strap on by just bending over. I didn’t notice much difference time wise between standing up and putting on my bindings and this quick strap system because I felt the need to adjust the ankle straps. Actually, it seemed like it took me a little longer to get these on than my Burton, Union, and Flux bindings I own. I have had people email me about putting on the bindings as they are moving off the chair and act just like skiers so take this with a grain of salt. I have seen many riders using quick release sitting down or on their knees so I tried it this way to see how the average rider is liking this. When I got down on my knees and butt things happened a little faster but I didn’t like getting on my knees or butt.  I’d much rather stand up and put on traditional strap bindings and this felt awkward. It’s no more awkward than any other quick strap binding I tried but it’s still awkward.  If you take some time you can get comfortable with the quick strap and get them on pretty quick but it will take a learning curve.

Heel-Toe Response: Felt pretty old school edge to edge and nothing special was going on here for binding this stiff. The technology felt like it was from the mid-2000s and you lose a lot of response to have this quick release system.

Tip-Tail Response: Not much going on here and it felt dead underfoot. The binding has a lot of contact with the board and It felt like we time traveled back to the early to mid-2000s.

Boot Support: If you take the time to crank down the straps it locks you in rather well but it’s not like many bindings in this price range that I have tried.

Ratchet System: It seems like the great ratchet system that is just like the traditional strap bindings I tried with K2.

Shock Absorption: There is some harsh/mellow shock absorption going on across the top of the footbed that isn’t bad.

The main thing for me as I’m not willing to sacrifice this much performance for the ability to get in and out of my bindings a little faster.

For 2011 the Cinch CTX added a canted high back and lighter straps. The 2012 is almost the same binding as 2011.  The straps do a good job in terms of support but unlike some companies there isn’t the same taper towards the middle to help make the ankle more comfortable. Still it does a pretty good job and doesn’t pinch.  The canted high back does a good job of keeping the body more in line.  We can’t say we notice more pop out of the board because of the can’t but we do agree with more control and reduced fatigue.  For $300 it’s hard to recommend this binding because other bindings in it’s price range offer more flex under foot and have newer base plate tech that can offer better response.  However if you are ok with a more traditional binding feel and feel quick release is very important to you then the CTX will be the call.

We try to get as many images of the K2 Cinch CTX, but forgive us if they're not all there.

I wasn't too impressed with these bindings.

They rode OK, but all that moving framework is flimsy plastic. For $300, I expected much better quality.

Ended up giving them to my cousin in trade for helping me put up horse fences.

product 0.3
2.0 2.0 1 1 I wasn't too impressed with these bindings. They rode OK, but all that moving framework is flimsy plastic. For $300, I expected much better quality.Ended up giving them to K2 Cinch CTX Review And Buying Advice