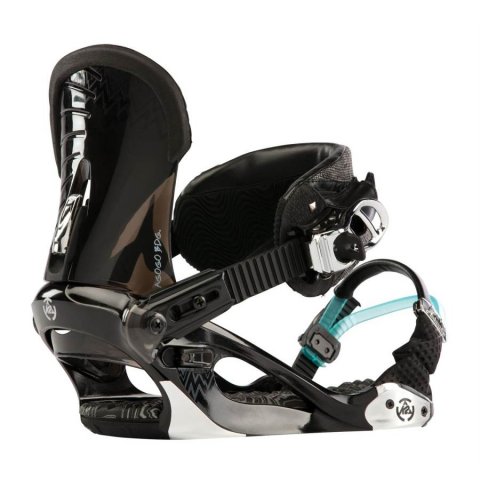 The K2 Auto Agogo LTD is different from the Auto Agogo and is much more freestyle focused.  The addition of Urethane really softens up the bindings high back and makes the ride much easier in the Jib park.

It’s hard to get excited about a quick strap binding when so many other companies are significantly improving flex under foot and all-around performance while these only offer quick strap and older tech.

With so many companies playing around with ways to increase performance and turn initiation we cant get excited about bindings that can auto tighten the toe strap but this is a good feature for those that want the easiest in strapping.

Many bindings do a lot to reduce the dead spot that most bindings create under foot by removing as much of the base plate as possible but the Agogo has a base plate that doesn’t have that much removed from it.  It makes for more of an old school dead underfoot ride.

The Agogo has an easy flex and to us is easier than the Cinch series or Flow Bindings because you don’t have to reach around behind you to put the high back in place.  The only thing is we can’t speak to the reliability compared to the Cinch and Flows.

All in all, if you are looking for a super soft park friendly quick strap binding the Agogo LTD might work for you.  If you don’t want quick release the Yeah Yeah might be a better call.

We try to get as many images of the K2 Agogo, but forgive us if they're not all there.