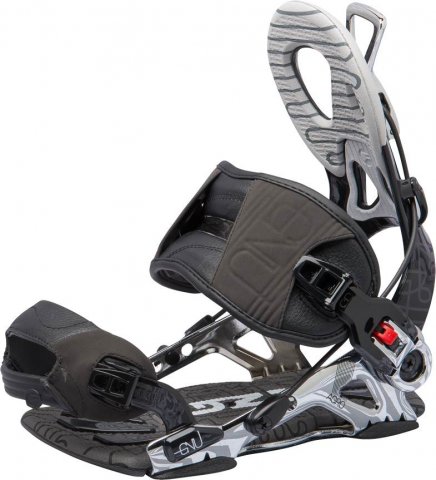 1. The Gnu Argo has traditional ankle straps and toe straps making it feel like a normal binding.  Other quick release bindings have this so it isn’t a super big deal.

2. The Pressure Relief Button- This is where the big deal is. It does a lot more than just relieve pressure.  It opens up the straps so you can get in but then when you put up the high back the pressure relief strap closes the ankle strap tight around you. Most quick release bindings like Flow and K2 require more work after if you want the same support as a traditional strap binding.

Flex: Medium/Stiff but there is still some play going on.

Adjustability: Not the easiest to adjust but you can dial most things out to your liking.  Thanks to the pressure relief button getting these on and off isn’t perfect but I had an easier time with these than I did with any other quick strap binding.  Still, there is that awkward entry where you don’t align with the toe strap well but it’s not as bad as most.

Comfort: The straps are comfortable once you dial out the binding to work for you.  I’m not usually that into bigger ankle straps in the middle but they do a good job bending where you bend. It wouldn’t be my first choice but most will like it.

Heel-Toe Response: Pretty solid response edge to edge and it felt like many good traditional strap bindings. It can handle some pretty difficult boards to turn.

Tip-Tail Response: The big ankle straps offer up some ability to leverage a board to flex more than you would expect and it’s not bad for a butter or press.  It felt close to some of the higher end traditional straps and they did a pretty good job allowing the board to flex lengthwise. It’s better edge to edge but not bad tip to tail.

Boot Support: That ankle strap is pretty supportive and if dialed out then it’s pretty locked in.

Ratchet System: You don’t need to expect much from the ratchet system with quick release but it seemed to work fine and the quick release isn’t terrible although I’d much rather be not reaching around to get them on.  It always feels awkward but I guess most people put these bindings on their knees or sitting down. I’d still rather just stand up and put my bindings on than use a quick strap though.

Shock Absorption: Gnu claims a lot of shock absorption and it’s not bad. There isn’t much EVA Foam but the other dampening tech even’s it out.

So I still say that I’m not into quick-release bindings but if I was forced to ride only quick release I’d choose Gnu over all their competitors.  It’s mainly because the pressure relief button makes these the fastest quick strap bindings I’ve tried. Once it’s dialed in there is minimal fussing and follow up adjusting.

We try to get as many images of the Gnu Argo, but forgive us if they're not all there.

I just got my pair of brand new Völkl Prime Alu bindings! Yes, they are Völkls not from Gnu but Völkl, Gnu and Fastec are the same because they all get there bindings from Fastec witch have the patent on that easy entry system. First of all I have to say that these bindings are real cheap looking compared with normal strap bindings in that price range (299,- Euros). After two hours of testing really all possible setups to fit in my K2 Thraxxis Boot I decided to send them back. I was not able to Setup the toestraps that they fit my boots...
There was always to much space on top and you don´t get the same fit every try you step in. The in and out system was pretty good and there is really enough space as fare I could see in the livingroom :-) but If you love to crank down your ankle strap it really feels a little bit insecure to trust the pressure releave system on the outside. All in all I would say I will not test them in snow under cold conditions with snow everywhere in the binding ....
Do your self a favour and buy a strap binding with smooth ratches like the Burton Diodes or the Flux FM !

product 0.3
2.0 2.0 1 1 I just got my pair of brand new Völkl Prime Alu bindings! Yes, they are Völkls not from Gnu but Völkl, Gnu and Fastec are the same because they all get there bindings from Faste Gnu Argo Review And Buying Advice