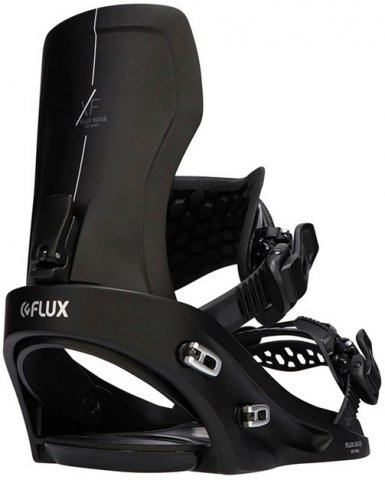 The Flux XF has no shock absorption, which is hard to get past, but is an incredibly responsive, supportive binding with amazing straps. 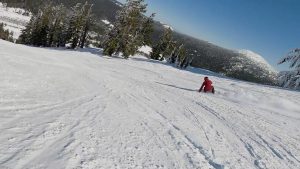 2.0 lbs with Screws and disc.- These are very light and you feel it.

The Flux XF doesn’t have much twist to it and has even less give when pulling back. It is very stiff but still has a snappy responsive feel to it.

Adjustability is good but not great with the Flux XF. It isn’t doable to center the boot in the binding for most sizes. However, you can adjust the heel plate and gas pedal to match up to the size of your boot.

Most won’t be able to get their boot centered in the binding. If you can there is limited stance width adjustability and you can only move it up and down a few millimeters.

The Flux XF has unreal boot support. The ankle straps are big and supportive. They were super comfortable too. They are also mounted inside the heel loop so they wrap better around your boot than other brands. The toe straps are some of the best in the business. We love them. They never come off and conformed perfectly to our toes.

Really exceptional ratchets. You can crank down to the point of pain and it does so in a smooth way.

The Flux XF is made for response and to try to stiffen up the board underfoot so Buttering isn’t made easier with this design. That being said it wasn’t super hard either.

The Flux XF is super responsive. It made the Union Atlas, which is pretty responsive, feel slow in comparison. Its one of the fastest bindings edge to edge we have ever tried.

I think there is enough response to let go of some of it in exchange for some shock absorption. I really mean some because is literally none right now. You feel everything underfoot and it makes old or not 100% functional joints feel way worse. At the end of the day both Peter and I felt like we wanted to end the day way earlier than we normally would. Conditions were still good but it didn’t feel that way with the Flux XF. This was a deal breaker for us and we even had some of the best shock absorbent boots and insoles in the industry on. It’s a shame because they do soo many amazing things with the design of this binding.

No shock absorption was a deal breaker for us. We couldn’t make it through a 100 Day season with the Flux XF. That being said, if you want all the response you can get out of a binding, this is it.

The Flux XF Snowboard Binding is great in terms of fit, support, and response but it comes with almost no shock absorption.  For us, no shock absorption is the deal breaker because it’s hard on joints from young to old but if you are ok with that then the rest of the binding is really well done.

We try to get as many images of the Flux XF, but forgive us if they're not all there.