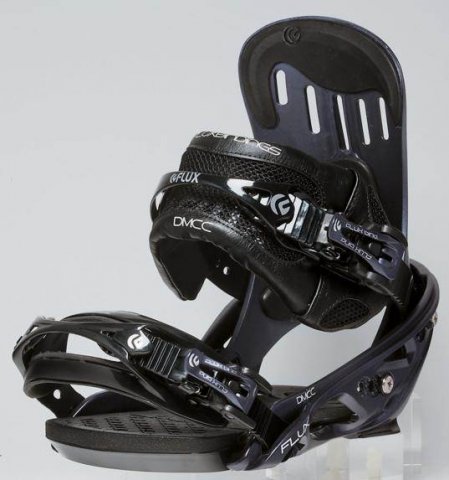 The Flux DMCC use to be called the Super Diamond before they decided to change their names to acronyms. The DMCC Stiff, Responsive and all around bomber binding for those that like the high-end side of every line. The DMCC is basically a lighter, snappier version of the SF45.

The Flux DMCC binding is to compete with the likes of the Burton Diode, Ride El Hefe and Union MC Metafuse. It’s a light aggressive binding that can handle strong boards but at the same time doesn’t completely overpower boards that aren’t quite as aggressive.  These bindings also are compatible with the Burton Channel Tech System because they have a base plate specific for those boards.

The 2013 Flux DMCC has a new high back and played around a tiny bit with the design to improve more comfort. Our favorite part is the new larger ankle straps that give more comfort/support than before.

Flex: These are pretty stiff but somehow they feel lively instead of feeling dead like some stiffer bindings can do. Light, lively and stiff is the best way to describe them.

Adjustability: Flux’s high-end bindings really have their adjustability down. You only need a tool for the disc and that’s it.  Very well done here.  It’s a little difficult to work with the screws in the cold but still, it’s a lot easier than most bindings out there. The proprietary screws from Flux are carried in a lot of shops so if you lose one in the snow it won’t be too hard to replace them. Flux’s customer service is really good if you need some help replacing parts or other needs.

Comfort: The DMCC’s from every year is incredibly comfortable.

Heel-Toe Response: The Response from the DMCC is going to be about the same from all years but it’s always nice to have a response from a lighter binding. Maybe it was us but the 2013 binding seemed a bit more responsive. All are smooth but strong and really know how to get a board edge to edge quickly. The Gas Pedal on the toe is the largest in the line and helps create good toe side initiation. The asymmetrical bindings are stronger on the sides closer than to the nose which helps with turn initiation. The ride was smooth but you could feel the binding bend even our stiffest boards. We had the most fun making big, hard fast turns and had a great time in the halfpipe as well. It seems like flux is right in between Burton and Union when it comes to response. Burton is ultra smooth Union is sharp and Flux takes a little from each. We aren’t saying one ride is better than the other but just that they have a different feel.

Tip-Tail Response: Now there is a lot of base plate going on here and there isn’t much of a reduced dead spot. What Flux does is create a binding that is just a little larger than the disc in the middle and goes wide enough to fit most boots. However, all the material underfoot is hard and it does create a dead spot with the board.  You can remove these little things on each side of the base plate (4 total) and get a  more tip to tail flex. The larger ankle strap gives you a little more leverage than past models and it kind of outmuscles most boards to flex despite the dead spot underfoot.

Approximate Weight: The 2010 and 2011 DMCC/Super Diamond was light but not really featherweight. The 2012 earned the featherweight title because they reduced weight almost everywhere on the binding but the biggest weight reduction was done in the Base Plate and Straps. It’s just barely a featherweight but we give it featherweight. The change was needed and very impressive.

Boot Support: No other binding company gives you such a supportive locked in feeling. The ankle strap is inside the heel instead of the outside which makes for a more snug fit.  All of the flux bindings have this but when combined with the larger ankle strap and solid toe strap the binding just feels more locked in than any other stiff binding we’ve tried.  You don’t have to crank this down as much as you do other bindings.

Ratchet System: Their their strap system is right up there with Burton and is arguably the best in the business. They ratchet down better than almost any other binding we have tried and they are well engineered to stay out of your way. We have still not seen them stick or cause any issues.

Shock Absorption: This is a very damp binding but it’s not that shock absorbent.  We have noticed that the heel shock absorption is better than any flux binding but it still doesn’t compare to most high-end bindings out there. We would have liked to see more of the base plate removed to allow better flex of the board but these bindings are soo good we can’t complain too much. However, the toe has more shock absorption than almost any other binding out there with the exception of some of the newer almost all EVA or ?? Foam base plate Bindings. With the addition of Gel to the heel the 2011 has more shock absorption than the 2010. The 2012 trumped both bindings by creating a continuous line of padding along where you rest your boot. We’d still like to see more but Flux is going in the right direction.

All in all, we were very impressed with the smooth but strong feeling these bindings offered in such a light package.  It’s hard to say get the DMCC over the SF45 because they are priced less and had close to the performance that the DMCC’s did. If money isn’t an issue and you need the absolute top of the line the DMCC might be worth the extra money for a little more snappy feel and less weight.

2012 Flux DMCC there were a lot of changes that happened but the biggest change is the high back was almost completely re-designed. The 2012 base lost a lot of weight from 2011/2010 and won’t be diabetic in its later years like the older ones.

2011 Flux DMCC added gel on the high back and on the base plate at the heel which is a great thing. They also added slightly better low profile strap ratchets which we don’t really care either way about it. the pure over the toe strap has been replaced for a more hybrid strap. They both work well but we actually preferred the over the toe strap from 2010.

We try to get as many images of the Flux DMCC, but forgive us if they're not all there.