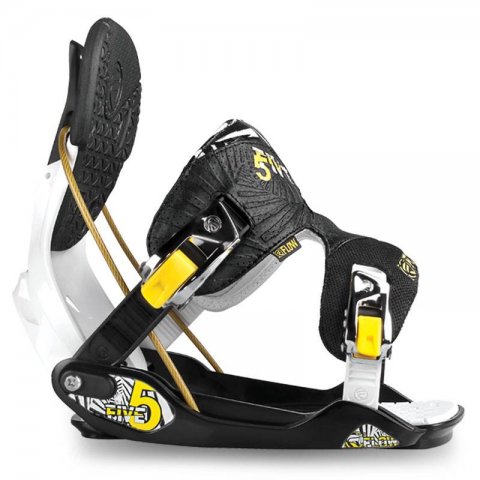 The Flow The Five is one of Flow’s more mellow freestyle bindings. Some live for this quick release but others feel you sacrifice support and turn initiation for that tech.  I’m one of those who do and so are most of our riders.

Adjustability: Flow bindings are a little different than the bindings I’m used to when it comes to dialing them out.

Comfort: As instructed by the Flow rep I kept a little bit of space between my boot and strap. By doing that I don’t have much contact but when I tightened it down to have more support I felt a little pressure across the roof of my foot but nothing like the older straps that covered the entire top of it.  I like how the boot goes into a toe strap now instead of just peaking out into the air. It’s a little more difficult to line up for quick in and out but it feels better for sure.

Turn Initiation: Kind of slow compared to most traditional bindings.  It feels a little slow.

Buttering: Not much flex underfoot and I didn’t feel like I had too much leverage to butter the board either.

Boot Support: With that little bit of space I feel kind of loose and like I’m just floating inside compared to most traditional ankle straps. I’m not one to crank down my straps either.  I like them only a little bit past solid contact so I don’t get bumps/pain mid-season. It’s something I’m getting more used to with demoing more Flow bindings but it’s still something I don’t prefer compared to traditional strap or bindings.

Ratchet System: Not much use for it but it’s decent.

Shock Absorption: Just some plastic with a little EVA foam on top and it’s not the kind of binding that I like to ollie with.

Overall The Flow Five didn’t blow me away but it was quicker than traditional straps and better than the old strap system.  If you have this down you can step in and flip the back up as you are one footing off the chair which is pretty quick.  It’s only a few seconds faster than stopping to strap in standing up but some people find shaving off that extra time is worth it.  If you put these on by getting on your knees to slap up the high back then it’s not worth it. Instead, it would be better to just learn how to put on traditional bindings standing up.

Flow Five’s design has changed very little over the years until 2014. They changed up the strap system and we liked it better than Flows standard strap. It relieves more pressure off the top of the foot. Last year we said get the Flow Five SE but this year you can go with the Flow Five thanks to the strap change. Well, that is if you are into Flow and what they are doing.

We try to get as many images of the Flow The Five, but forgive us if they're not all there.