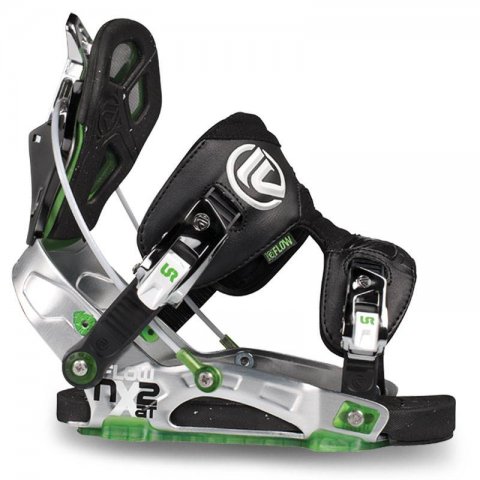 The Flow NX2-AT is more of their all mountain binding. Until 2013 the NXT-AT’s design hasn’t changed much over the years until it’s been re-designed as a Flow NXT2-AT. The old binding was missing all of the modern techs and the new NXT2-AT has a lot of it. Despite these upgrades, neither Peter or I were into the binding or curious about spending more time on this binding either.  Here is the review after a few runs on it. The 2013 and 2014 Flow NX2-AT are pretty much the same bindings so this review stands for both years.

Despite our first impression, I took this binding out a second time to see if our opinions were really off but instead it solidified my opinion. Our biggest issue is you need a little space to get in and out of the bindings quickly but that space makes the bindings feel loose, unresponsive and they gave me an unsafe feeling. Some riders will get used to this feeling but other riders, like Peter and I, won’t like this at all and will be forced to crank down the straps to give a tight secure fit.  Having to follow up and crank down the straps after the quick straps takes all the speed out of these bindings. Even after working down the uni piece strap around my boot like a traditional strap I didn’t feel the support I got with traditional ankle strap systems.  Also, it was awkward to put these bindings on standing up.

Days:  2
Riders: James and Peter
Boots: Burton Ion, Burton Imperial, Nike Kaiju
Boards: Lib Tech TRS and a board from Flow called the Breast Board Ever I think.

Flex: Pretty stiff high back. Hard to flex it.

Adjustability: It’s a little more complex than what we are used to but with a little work you can get it dialed.

Heel-Toe Response: For such a stiff boot I thought the response would be better. The first time with the straps a bit lose so I could get my boot in and out it felt pretty unresponsive. After I tightened this down the second day I still didn’t feel like I had the response of most traditional strap bindings.  When it was tightened up it felt good when I was expecting a lot more and with it loose so I can get in and out quickly it felt average.

Tip-Tail Response: I didn’t feel like I had a lot of leverage for a butter or press despite the Flow NX2 AT’s reduced contact with the board.

Boot Support: Didn’t feel very supportive even when it was cranked down.

Shock Absorption: Really excellent shock absorption and the base felt like it could handle a flat landing better than most.

All in all, we weren’t that impressed with this binding.  We aren’t negative guys and hate writing reviews like this but after our experience, we feel you lose a lot of support and performance to get easy in easy out binding.  Also if you want more support you spend almost the same time with these bindings as you would standing up and putting on traditional straps.

We try to get as many images of the Flow NX2-AT, but forgive us if they're not all there.