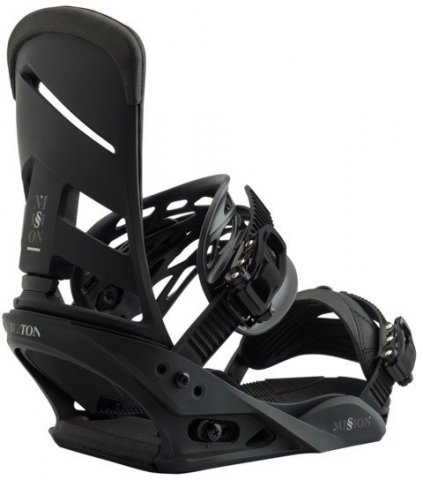 The Burton Mission Re:Flex is often the constant recipient of Cartel hand me down tech but lately it’s received its own high back.  It’s a very solid choice for those who want something like the Cartel but at a lower price point.

In 2018 they added a more Cartel like the design to the Burton Mission high back but it has a stiffer flex to it than this years cartel. In years past Burton would usually take the Cartel’s previous seasons high back and put it on the Mission. This year the Mission got its own unique design which gives it more personality instead of being the past Cartel re-marketed as the Mission.

Flex: Very stiff flex that’s got a Cartel feel but with less give. It’s still not completely unmovable but it’s still got a more aggressive flex than the previous model.

Adjustability: Same Great Adjustability as the previous models and we are big fans of almost everything except the high back rotation requires a screwdriver. Other than that it’s almost all tooless.

Turn Initiation: The Burton Mission is a bit behind the Cartels and other more responsive bindings in Burtons line. It isn’t ideal for those that have a demanding board when it comes to turn initiation. It does have a smooth cushy response that pairs up really well with easy turning boards.

Buttering: About the same as last years and about the same as the Cartel. It’s got a nice easy butter to it. The EST is a better butter but you limit yourself to only one brand of board when you buy that. For us this is good enough and without the hinge tech it’s not going to compete with

Boot Support: The 2015 Burton Mission Re:Flex has a more supportive feel to it compared to the 2014 and below. This is mainly because of the bigger asymmetrical ankle strap. It also seems to suck your boot into the heel pocket and it was kind of hard for us to get it out on occasion. It can feel like it turned your boot into a suction cup.

Ratchet System: Smooth easy ratchet system but we are more into the Cartel toe ratchet than the mission. Its just missing that extra lever on the outside near the teeth. With the missions, you are putting your gloves into the ratchet teeth when pulling them off. It can’t be that much more to add the cartel toe strap to it.

Shock Absorption: Almost the same outstanding shock absorption as the higher end bindings and it really is a smooth damp ride.

So, all in all, we were pretty impressed with the Burton Mission Re:Flex and feel that this year it’s starting to get its own personality instead of just being a Cartel hand me down.

The 2014 and previous years Burton Mission were well liked but the 2015 Mission earned our favorites nod because its more responsive and broke out of the shadow of the Cartel.

The 2014 Burton Mission is the same as the 2013. Nothing really changed this year.

The Burton Mission has been around for a long time and every year seems to win the “cartel light” award which isn’t a bad thing. If you are looking for something like the Burton Cartel’s but a little bit cheaper then the Mission might be the call. We have liked that every year the Missions usually get some sort of good hand me down from the Cartels that improves it’s performance.

Regarding Re:Flex Tech: Re:Flex Tech really changes the way the board rides for the better but it has one minor issue that should be addressed. Most 4 hole Discs can be aligned tip to tail or heel to toe but the Re:Flex Disc can only be aligned heel to toe. This isn’t a big deal because most align heel to toe but some like to turn their discs side ways to reduce or increase their stance width to a size that the binding holes won’t allow. If you do this make sure your board has the stance width you desire.

2013 Burton Mission– This year the Mission went Re:Flex which is great. It has a smoother ride, stiffer high back from last years Cartel, last years cartel base plate and a little more flex under foot. It’s not as ultra flexy under foot as the Cartel Limited or Genesis but it offers mo beta butters and presses than all the previous models. We like this all around ride better than the other models we came across.

Adjustability: Just like almost all Burton bindings its very easy to make it fit your boots weather they are Burton or not.

Comfort: Very comfortable and almost right there with the High End Burton bindings.

Heel-Toe Response: The ride is very smooth and pretty responsive. It’s almost right there with the Cartels. We need the bigger ankle strap and hopefully that will be handed down from the Older brother the Cartel soon.

Tip-Tail Response: Huge improvement here with the addition of Re:Flex. It makes it the superior binding when it comes to buttering and pressing. The board also just feels a little more alive under your feet.

Boot Support: Not bad but you get a little more support from the Burton bindings with a bigger ankle strap. It’s right about average with the rest of the industry.

Shock Absorption: The 2013 has excellent shock absorption and so does all the Re:Flex models. Pre-Reflex is a little less but still very good. We did notice that after a few days of hard riding with the 2011 and 2012 you can begin to see marks where the boot imprinted. You can imagine that this will probably get worse over a year or so of riding.

All in all the Burton Missions will perform almost as well as the cartels and will match up well with many soft to mid flexing boards in the market. If you are looking for a mid flexing binding that will work in the freestyle or all mountain wolrld the Mission isn’t a bad choice for the price. Like all Burton bindings its far more adjustable than almost any other binding out there so if you like to micro adjust Burton is the call.

The 2014 Burton Mission is the same as the 2013. Nothing really changed this year.

2011– The Mission was given a hand me down from the old Cartel high back. The base plate is very similar to the 2010 and it makes this pretty much last years Cartel Binding.

2010- Similar Base to the Cartel but a unique and softer high back. The toe straps were good for 2010 where many in the Burton Line weren’t for this season

We try to get as many images of the Burton Mission, but forgive us if they're not all there.

I love these bindings, used them on a setup back in 2004 and I bought them again for my current budget freestyle set-up. I'm very happy with them however I think that Burton should review their pricing strategy. 170$ for the Freestyle bindings and 220$ for these bindings is way too expensive since the Custom bindings were removed from the lineup. Burton should really consider in lowering the price for the entry level bindings to at least 150$ and 200$ for the Mission bindings. Also the Cartels are not properly priced: 270$ for the Cartels that are not the same as the traditional Cartels and asking for 315$ for the Cartel X that are similar to the traditional Cartels is just a lazy way to increase prices for all the best selling range of Burton bindings.

Overall solid bindings. Can't really think of any flaws beside the fact that they're pretty expensive.

product 0.3
4.5 5.0 2 2 I love these bindings, used them on a setup back in 2004 and I bought them again for my current budget freestyle set-up. I'm very happy with them however I think that Burton should Burton Mission Re:Flex 2018-2010 Snowboard Binding