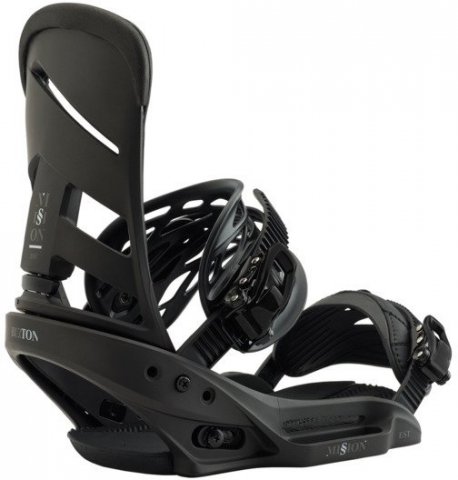 The Burton Mission EST is not compatible with other boards than Burton. Other than a little better flex under foot and slightly better tip-tail response the Mission doesn’t offer much more.  There are other EST bindings like the Cartel Limited EST, Genesis EST and Diode EST that offer a lot more so if it were up to me I’d get the re:flex so you can keep your options open.

Days: 2 days
Riders: James, Peter and Stephen.
Boots:  Burton Imperial, Nike Lunarendore
Boards: Burton Nug, A few others but I’ll have to look them up.

The 2015 Burton Mission EST  is one of those bindings that often get hand me down tech from the Cartel but this year it’s got its own design and steps into having its own more aggressive personality.

Flex: If you wanted the cartel with a stiffer high back you now have the Mission for that.  You also don’t compromise as much tech wise this year as you did with previous years.

Comfort: The new ankle strap is going to be comfier and the whole re-design acts as a better fit around your boot.

Turn Initiation: No real change from last year but it would be nice to see them add hinge tech for this EST model.  It would help with ollies and just getting more spring from your board. Because it doesn’t have hinge tech it only offers up a little better buttering power than the Re:Flex and in our opinion, it’s not really worth it to buy the EST instead of the Re:Flex unless you are 100% married to Burton boards.

Buttering: There is a little more edge to edge response with the 2015 over the 2014.  It’s got more leverage either way with the stiffer high back and more supportive/responsive ankle strap.

Boot Support: It really fits well around your boot and holds it in pretty tight.  The larger ankle strap supports the sides better and both bindings can have a suction cup feel with the

Ratchet System: We like the Cartel Ratchet better because it has an extension that protects your fingers from the ratchet teeth.  This one doesn’t.  It’s still smooth and easy though.

Shock Absorption: Very damp and shock absorbent if you get the standard footbed.  However, you can get a more skate-like feel underfoot with the thinner one.

So, all in all, we were pretty impressed with the Burton Mission Re:Flex and we like the EST improvements too. However, we would strongly recommend the Re:Flex model over this just because you can pair it up with any board out there.  This is Burton only and no one likes proprietary tech in an industry that is mostly standardized.

The Burton Mission EST is pretty much the old Cartel EST re-branded under the name Mission.

Heel-Toe Response:  The med/stiff high back offers a little more on the heel side which some might feel a little off compared to the more even cartel but it still offers a smooth pretty responsive ride that many will like. The EST system will make the board feel softer and there fore a little more responsive.

Tip-Tail Response: The EST set up makes the board you are riding feel like there is no dead spot and you get a lot more butter power out of it because of that.  The ankle strap is really small compared to the Cartel and you don’t have as much leverage length wise but it still makes the board under you butter better.

Boot Support: There is a decent set up here but it just doesn’t have the support of the Cartel bindings.  You can get a little more support from the restricted model but it’s still not complete like the Cartels.  On the other hand if you want a little more freedom around your ankle you will prefer the Mission.

Ratchet System: It would of been nice to see the same toe ratchet as the higher end bindings but they are still near the top of the industry.  This isn’t as effortless as the toe ratchets that have that little lever/lifter after the teeth.

Shock Absorption: The Burtion Mission EST comes with a foot bed that is almost as good as the Cartel EST foot bed.  It’s very thick and shock absorbent but it doesn’t have a cant. You can buy a canted foot bed for $30 if you want or thin out the foot bed (5mm) to get a more skate like feel under foot for the same price3. It’s nice to have that versatility since you are committed to Burton boards.

We try to get as many images of the Burton Mission EST, but forgive us if they're not all there.