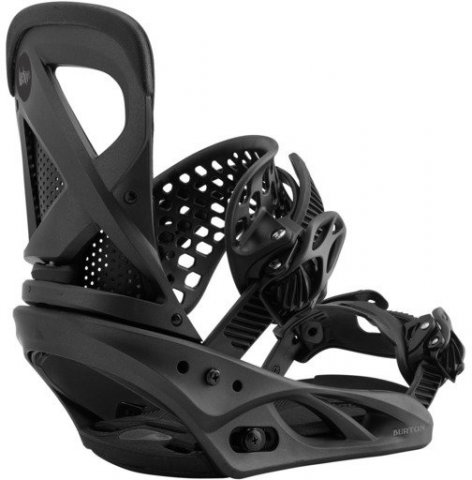 The Burton Lexa has been around for a while and is well-liked among a broad range of snowboarders. Both are very popular and will perform well with almost any board. Here is a quick summary of the improvements over the last few years. Overall the Burton Lexa is a great binding and one of the best out there.

The Burton Lexa has been around for a long time and makes for one of the more well rounded Burton bindings in the women’s line. It fits a wide range of riders and riding styles.

2015 Burton Lexa– The 2015 Lexa has a very similar ride to the 2014.  Actually pretty much the same.  The only real difference is an upgrade to the ratchets which are smoother and easier to put on.  Also, there is a little more going on with shock absorption with the extra padding under the binding.  It’s nice to have this tech but it’s not a major improvement over the 2014.

2014 Burton Lexa– So the 2014 Lexa has the same larger slightly asymmetrical ankle strap as the Men’s Burton Cartel and that is a really good thing.  This gives better boot support and leverage making it for sure the call over the 2013 model.

Flex: The Lexa has a pretty aggressive high back but it doesn’t quite have the sharp response that usually comes with a high back of this type.  It gives you a lot of support on the inside and the outside is a little softer.

Adjustability: Burton just makes very easy bindings to dial out. It would be nice to see the whole thing tool-less but

Comfort:  Very Comfortable ankle strap and all around a comfortable binding. Every ankle and foot is different but this makes a wide variety of riders comfortable.

Turn Initiation:  The edge to edge response is very good. It feels pretty smooth for its flex and it makes the board feel a little softer underfoot. Therefore it turns a little easier edge to edge without feeling super responsive. The best way to describe it is smooth.

Buttering:  The Re:Flex tech is pretty good here and it’s one of the better women’s bindings for getting a good flex underfoot.

Boot Support: The 2014 Burton Lexa model might have a slight improvement edge to edge with the new larger ankle strap but the boot support for sure is much better.  There is a much more secure feel. The ankle strap is the smaller old school one that hasn’t changed much over the years and it isn’t as supportive as the newer models like with the Escapade.

Ratchet System:  Practically perfect compared to Burton’s competitors.  it really is easy to crank down and to get off.

Shock Absorption:  Great for dealing with hard uneven snow or for that horrible flat landing.  It creates a nice barrier between your body and the gear under your feet.

2013 Burton Lexa– The 2013 Burton Lexa is pretty much the same as the 2012.  We would of loved to see a hand me down ankle strap from the 2012 Escapade but no. It looks like women riders will have to wait another year.

Regarding Re:Flex Tech: Re:Flex Tech really changes the way the board rides for the better but it has one minor issue that should be addressed.  Most 4 hole Discs can be aligned tip to tail or heel to toe but the Re:Flex Disc can only be aligned heel to toe. This isn’t a big deal because most align heel to toe but some like to turn their discs side ways to reduce or increase their stance width to a size that the binding holes won’t allow. If you do this make sure your board has the stance width you desire.

A quick look at How Re:Flex Tech Works

2012 Burton Lexa– Re:Flex Tech came to the Lexa binding and this is a great thing.  This 1 year old tech makes for better flex/response under foot and it now rides much closer to the Lexa EST.  If you only ride Burton boards then the EST will have a little better performance but we feel the call for every other rider is the new Re:Flex. We are big fans of this new tech and feel it’s a big improvement over the 2011 and 2010 models. There is also a new high back that offers a slight bit of improvement response wise over the 2011’s. There is also a bit of a cant in the footbed to line your legs up better with the board and reduce stress on the ankles/knees/hips The cant isn’t noticable from looking at it but the foam on one side is softer than the other so you angle in a bit.  We would of liked to see the larger asymmetrical strap that’s now on the 2012 Burton Escapade but still there are some improvements over the 2011’s.

2011 Burton  Lexa– For 2011 the Strap was fixed and is more like the older straps and that is a positive.  It grips very well over the toe or in the old school way.  In 2011 many of the top mens snowboard bindings like the Burton Cartel, Prophecy and Co2 have a new completely re-vamped base plate.  It improves response that makes for a great ride. It sucks that the women’s models are devoid of any of this new tech.

2010 Burton Lexa– Burton’s best upgrade on the Lexa is the channeling out of the back part of the base plate to allow a lot of cushioning like the top of the line Burton bindings. The more cush the better. The toe strap from 2010 is problematic and we liked the older version instead of this new hybrid strap. We have noticed more than 3 of the riders have had the strap come loose at the end of the run no matter how much they crank it down. It also sucks that you have to cut the plastic lead into the toe strap to make it work right.

We try to get as many images of the Burton Lexa, but forgive us if they're not all there.

Great all around bindings

I used the 2015 version of these bindings with my Rossignol Diva board for about 20+ days of riding around Tahoe. I ride all of the runs and sometimes go off the jumps in the parks. I thought they were great! I forgot to adjust them before my first day of riding and they were much too snug against my boots, but it was fairly easy to adjust on the mountain at one of those tool stations. I have a bad knee and was never too sore after riding on an icy day -- the combination of these bindings and my Burton Supreme boots provided nice shock absorption. I felt very locked in and am looking forward to using these bindings again this season. They help up very well and I should get at least another 20+ days of riding in.

The only thing I didn't like was the color. I ordered the "crime scene red" online and it felt too much like Spiderman, but I didn't want to waste the money/time to swap them out for a different colorway.

Great bindings, but go for the larger size if you're on the edge

Love these bindings. Great lightweight design, with a really solid ratchet system. The easy adjust tools are great if you need to tweak your staps a bit on the mountain. The shock absorption is fantastic all around.

The only thing I'd warn is that if you're right on the cusp of a larger size, go with the larger size. I have a size 8 K2 boot, and while the Women's Medium is meant to fit up to a size 8, it's a really tight fit. I think it'll be fine once the boots have worn in a bit more, but if I could go back in time, I'd order the size Large instead.

I have tried many bindings. I even have the Union Trilogy and they suck compared to Lexa. Lexa is very light and respond very quick. Super comfortable and adjustable If they were lighter and would love them even more.

product 0.3
4.7 5.0 3 3 I used the 2015 version of these bindings with my Rossignol Diva board for about 20+ days of riding around Tahoe. I ride all of the runs and sometimes go off the jumps in the park Burton Lexa 2010-2017 Snowboard Binding Review