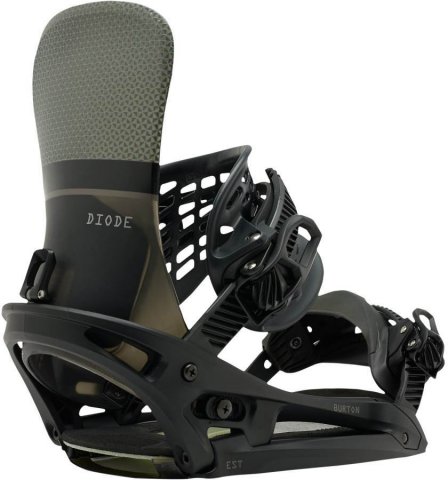 So the Burton Diode EST is one of those binding that cost more than many boards out there but it offers a lot of response, extra ollie power and a really natural flex underfoot. The only shitty part about this binding is it only works with Burton boards. If you only ride Burton’s stiffer boards the Diode EST could be a pretty good call. This doesn’t come with a canted footbed but you can buy one as an accessory.

The 2016 Burton Diode EST has a new toe strap but that’s about it. With the demo model, the rubber was too stiff and it didn’t conform to the toe.  The rubber of the production model is much softer and works great.  Now it’s better than the demo’s and even better than the previous year’s models.

The 2015 Burton Diode EST has a few minor tweaks like ankle straps that fold out easier but for the most part, the ride was very very similar. It wasn’t one of those bit years for change.

Riders: James, Peter, Kyle, Stephen, Mary and a few others.

The 2014 Burton Diode EST has a lot of changes going on here this year.  The ride is still pretty similar but we like most of the changes for this year.  So here are the major ones to us.

1. Much better high back this year.  It’s not Carbon Fiber anymore but has a blend so the ride doesn’t feel as rigid while still being very responsive.

2. It’s got a new ankle strap that really conforms to your ankle.  It’s very supportive and does an excellent job of holding you in place. Nice improvement over last year.

3. It has a new ratchet system that was a little off at the demo’s but the production models are just fine. We all kind of felt that they had an excellent ratchet system so why change it but they pulled this off.  The ratchet is smoother than before and it’s very easy to do one-handed. Also, it cranks down even better than before.

The Burton Diode EST is going to be the Burton Board Only version of the Regular Diode.  So there is one feature here that is unique to any other binding company and even more specific unique to higher end Burton Only EST bindings only.  It’s called “Hinge Tech” and it has a very unique feature.  There is a springy hinge at the base of each side of the heel loop at the base. It gives you added Ollie power and makes any Burton board you ride Ollie higher than a regular binding. It’s a little harder on the board but who cares.  To me, it’s worth it to have this kind of spring in an Ollie.  It makes me feel 10 years younger. If you only ride Burton boards then you will probably want this over the Re:Flex.  We always buy the re:flex because we ride so many different boards.

Approximate Weight– Feels a little heavier than the Re:Flex but still feels light.

Flex– Same very stiff high back as the Re:Flex. It doesn’t give very much.

Adjustability: Burton makes some of the best bindings when it comes to easily dial them out.  There are still some places that require a screwdriver instead of a tool-less screw but you can get the binding to feel comfortable for you better than almost any other binding out there.

Comfort: The average rider who doesn’t crank down their ankle straps will find this one of the most comfortable bindings out there.  The Ankle strap is light and thin but incredibly comfortable while still being very supportive.

Heel-Toe Response: It’s a very responsive binding but it feels almost smooth.  It doesn’t overpower the board underneath but instead makes the board feel softer and easier to turn. It’s a very smooth feel too it. The high back is a little too stiff for me and Peter but the rest of our crew love this flex and like the almost uneven feel from heel to toe.

Tip-Tail Response: Some of the best feel underfoot for an aggressive binding we have ever experienced. No other bindings have this feel under foot including Re:Flex.  It’s a better shade of excellent compared to the Re:Flex version. It makes Burton boards easier to butter and press and just feel better underfoot when playing around.

Boot Support: Same as the Re:Flex here. You give up a little support for better shock absorption but still have a lot more than most bindings out there.

Ratchet System: Un-Sticky and practically perfect in every way. You never really think about getting your boots out with Burton Bindings.

Shock Absorption– You have multiple options here and you get one that opts more for feel than shock absorption.  If you use the thicker canted 2.0 footbed your entire foot has amazing shock absorption.  It’s very friendly for a flat landing.  You can get much more of a skate like feel and a little more boot support with the very thin 5mm footbed but the bed it comes with is pretty close to this and in our opinion better.

Some complain that the 2 screw per binding system comes loose but we haven’t experienced that. Burton’s first channel system bindings didn’t hold well but they have improved since then. We are average riders though and since the first round, we have had no issues if they are tightened properly from the start. We ride hard but we don’t go big. I’ve heard some pro’s or exceptional riders complain about the 2 channel system coming loose. If you are a rider that goes big every day who hit’s 30+ foot kickers all the time this could be a concern. Otherwise, I feel Burton mostly addressed this issue.

We try to get as many images of the Burton Diode EST, but forgive us if they're not all there.