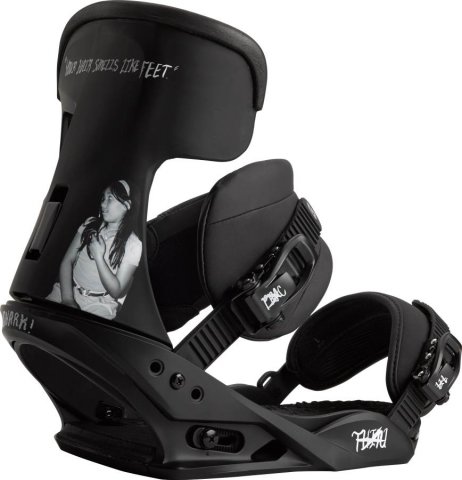 The Burton Cobrashark is the little brother to the Restricted Malavita Re:Flex.  It’s got some forward lean and it also isn’t as responsive edge to edge or laterally but it’s a very good freestyle binding for the price.  If you can afford the Restricted Malavita then that is the way to go but if you need something more affordable the Cobrashark Re:Flex is a very good choice.

The 2014 Burton Cobrashark hasn’t changed much and the ride is very similar to the 2013.

Riders: James, Kyle, Peter, Eli, Lee and a few others.

The Burton Cobrashark is affordable re:flex for the freestyle rider and a great choice for those that love a little extra leverage in the park world. We have a lot of fun on this binding and feel it provides a smooth shock-absorbent ride that gives you a lot of lateral movement for butters and presses.  You also get a little bit of extra ollie power.

Regarding Re:Flex Tech: Re:Flex Tech really changes the way the board rides for the better but it has one minor issue that should be addressed.  Most 4 hole Discs can be aligned tip to tail or heel to toe but the Re:Flex Disc can only be aligned heel to toe. This isn’t a big deal because most align heel to toe but some like to turn their discs sideways to reduce or increase their stance width to a size that the binding holes won’t allow. If you do this make sure your board has the stance width you desire.

2013 Burton Cobrashark–  This year the Cobrashark went Re:Flex but the re-flex design is more like the Cartel Re:Flex underfoot than the 2013 Malavita or Limited Cartel. Also, you only have the winged high back option this year which is appropriate for the bindings ride. The flex underfoot is better laterally but edge to edge it’s about the same as the older models.  There is a significant jump in flex underfoot from the Cobrashark to the Malavita. Now, this is a freestyle to jib/street binding so if you are looking for more of an all mountain binding in the same price range you might be happier with the Burton Mission.

Adjustability: Like all Burton bindings it’s excellent.  The ankle strap and toe strap can be adjusted with or without a tool but you still need a tool for dialing out the bindings. Now when it comes to adjusting the binding to every minor need there isn’t a better binding.  This isn’t special to the Cobrashark but it’s common with almost all Burton Bindings.

Comfort: From the extra cushioning to the very comfortable straps the Burton Cobrashark does what most Burton Bindings do and that offers great comfort. For those that don’t like a binding that starts with some forward lean at the lowest setting then it could be a little uncomfortable.

Flex- Now the flex in the high back is pretty stiff which would lead you to believe that the Cobrashark will be very responsive but that just isn’t the case.

Heel to Toe Response- When it comes to edge to edge transitioning it struggles with stiffer boards and can be challenging with medium/stiff boards.  Some medium flexing boards are ok with it but it shines with softer flexing boards.

Tip to Tail Response– When it comes to a lengthwise flex it is really good. The Burton Malavita does a better job but this is better than just about any binding in this price range.  The feel underfoot is pretty alive and not that dead but the wings along with the larger ankle straps help take the lengthwise leverage of the board to the next level.

Ratchet System: Excellent ratchets that are smooth on and off. Burton makes great ratchets.

Boot Support: This is totally locked in on the outer side but there is a good amount of freedom of movement on the inside.

Shock Absorption: Super shock absorbent and a great choice for anyone who likes some good cushioning underfoot.  It’s especially good under the heal and offers a smoother ride because of it.  This base plate is thinking about the 20-year-old rider who still wants to ride when he’s 50.

2012 Burton Cobrashark– was still a disc binding while many have gone to Re:Flex.

We try to get as many images of the Burton Cobrashark, but forgive us if they're not all there.