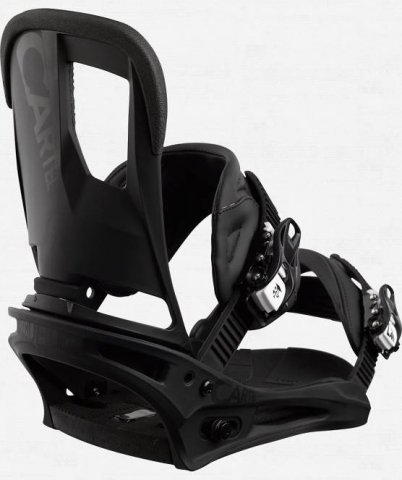 The Burton Cartel Limited is one of those bindings that was a late release and one of the best bindings we have come across in a while.  It’s Re:Flex footbed flex underfoot is very close to EST tech and the overall feel is much better than all the cartels. If you can find this one get it. Take the lighter slightly more responsive Diode Base Plate but keep the high back and you have an excellent ride.

The Burton Cartel Limited Re:Flex is basically the Burton Diode with the Cartel High Back which is one of our favorite combo’s.   This was a late release and we didn’t get to try this till it came out. Peter and I instantly fell in love with this model and we both bought them.  We both use these bindings more than any other binding we own and aren’t getting rid of them at the end of the year as it looks like they aren’t making them again next year.  This smooth flexing fun binding underfoot offers a great ride and changes the way a board feels underfoot.  This and maybe the Diode Re:Flex are the closest you can come to an EST feel underfoot.  Even better you can take it to any Burton or Non-Burton board you want.

The quality of construction and look of the Limited model is better than the Restricted Re:Flex and standard Re:Flex models. It has that high-end Diode look as well.

The Burton Cartel is the kind of binding that everyone knows but not everyone is clear on the various models.  This particular review will compare this model to other models but will mainly be about the Burton Cartel.  So let’s start with how it’s changed over the years we have been reviewing it. This Cartel (especially the 2013) has a bit more of an all mountain flavor than the Restricted models.

Adjustability: It’s almost the same as the regular cartel but has only 2 positions for you to mount the ankle strap instead of 3.  If you like the lowest setting, the regular Cartel will be better but most prefer the middle or the top so it’s almost as adjustable.

Comfort: So the Limited is equipped with the best ankle strap in Burton’s line of bindings and it’s much better than the regular cartel ankle strap. It’s the same size as the Cartel Re:Flex and Cartel EST, but it’s lighter, thinner, has a better fit and is just a little bit more responsive.  The rest of the binding is just as comfortable as the regular cartel.

Heel-Toe Response: It feels more responsive and more smooth edge to edge than the regular Cartel.  It is a very interesting change in response.  Instead of feeling like the binding is more responsive it feels like the board is softer and easier to ride underfoot.  There was even a very noticeable difference between the Burton Cartel standard model and the Limited.  They are both Re:Flex but it just seems that this Re:Flex is better. This is because there is less contact with the board than the regular cartel

Tip-Tail Response: This is the same as heel to toe response in terms of feel.  It doesn’t feel like the bindings are bending the board better on a butter but instead, it feels like the board itself if softer and more playful. Even compared to the regular Cartel Re:Flex there was a big difference in terms of flex underfoot and lengthwise response.

Boot Support: The support is great here and the only thing keeping it from being totally locked in is the softer more shock absorbent footbed.  Both Peter and I prefer more shock absorption and feel this compromise is worthwhile.

Ratchet System: Very easy on or off and it’s probably the best out there.

Boot Support: Really great ankle strap and high back that integrates well with most boots.  The only thing that makes it a little less than perfect is the soft shock absorbent footbed that gives a little bit. You can’t have both and I’d rather have shock absorption than a perfectly locked in binding.

Shock Absorption– So much padding going on here in the heel and toe.  It reduces fatigue and makes the board feel damper.  It’s one of the preferred bindings out there when it comes to a bad landing.

All in all the Cartel Limited to us is the best binding in the Cartel Re:Flex line and one of the best bindings we have ridden.  It’s very close to the high-end EST models.  Like I said I usually dump bindings at the end of each season but I’m keeping these until something better comes along in Burton’s line. I think Peter is doing the same.

We try to get as many images of the Burton Cartel Limited, but forgive us if they're not all there.