So the Superfeet Green were the first insoles I ever tried. You would think that would make me nostalgic but it’s kind of a mixed bag  They aren’t bad insoles but there are better ones out there for snowboard boots.  The cushioning and shape of the insole is great but the super hard raised up plastic heel cup isn’t as good as insoles that have a soft shock absorption material in the heel like Remind, Montrail, and Shredsole.     The hard plastic arch is fine but they should cut out a big hole in the heel so its foam passes into bottom of the boot and works with the shock absorption material that’s below.  Instead, it feels like there is a layer of hardness between the boots that was harder on my heels than the above-mentioned insoles.  I ended up ripping off the plastic heel cup and then stopped using it in my snowboard boots.  It now sits in a casual shoe. So this is better than what you get with the snowboard boots….a lot better but there are better after market insoles that are much better for snowboard boots.  This is the most popular insole out there but we all found Remind, Montrail and Shredsole better for snowboarding.

We try to get as many images of the Superfeet Green, but forgive us if they're not all there. 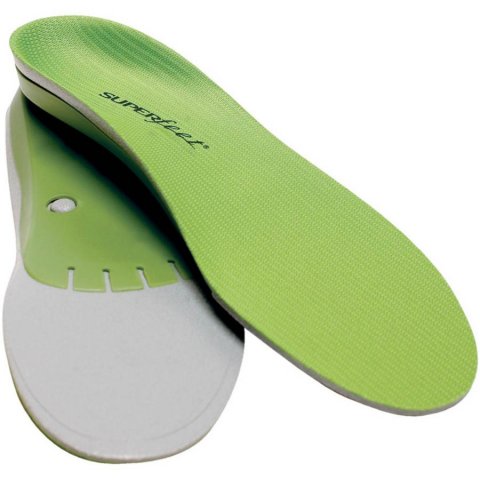