The Sony HDR AZ1 Mini Cam is a small fun little cam that I like a lot. After trying the Sony FDR-X1000V and the Sony HDR-AS200V I found the battery life and video quality better but this is still a great little cam for the size and a solid helmet cam for snowboarders.  I own this and used it a lot in 2015. You will see footage from this cam in many on snow reviews.

Video Editing Software Used– Corel Video Studio Pro 8.  Did not render the files in the same format as the original so what you see is not the same exact video out of my sd card.

Just so you know this is not a super techy review but more for plug and play point and shoot snowboarders like me. I want good footage right out of the cam that requires little editing.

Video Quality:
The footage here is all filmed in MP4 PS mode which is 1080p 60fps at 25mbps. The video you see is pretty compressed and it’s much more clear on my PC. Both were edited with Corel Video Studio Pro 7u which converted the file from its original source.

Here is the Same footage with the Sony X1000V.  As you can see the X1000V has better video quality but the AZ1 is still pretty good.

The Sony Mini Cam has really good image stabilization which is really critical for snowboarding.  You are bombing down hills at high speed as well as riding over bumpy terrain with just a monopod to hold it so it’s really important to have a camera that will help smooth that out.

We don’t have any footage flat to bright light footage up on this review but found it to do well. Hopefully, I’ll get some good footage up.

Fit and Ease of Use:

Now setting this up isn’t super easy but it’s easier than it was in the past.  There are some really un-intuitive settings like Sony proprietary language for video quality instead of just saying 1080/60p, 1080/30p, etc.  However, once it’s set up it’s fine.

Now there are a ton of accessories but we have had the most fun with the monopod.  After that, the goggle mount might be the best call for powder days when you don’t want to be holding a cam on a stick.  I personally love how it side mounts and doesn’t top mount.  It’s much more easy to work with.

The only thing that can suck is if you don’t lock the record button it can accidentally start recording.  I actually have accumulated over 2hrs of pocket action cam vid since I bought this.  That’s easy to delete but the biggest problem is the battery drain.  You pull it out to record and find your battery is dead so make sure you lock the record button so it doesn’t pocket record.

We see this as the biggest problem.  At 1080/60p it seems to only have about 1.5 hrs of video time. It was an easy fix for me and I just bought a few extra batteries. They are super small so it’s easy to carry them.  The super small size is so nice that I’m ok with carrying around a few extra batteries. If you want more battery life then the HDR-AS200V will be the better call.

Now the Protective Case is another story and just too damn large for such a small camera.

So, all in all, we are pretty impressed with the Sony Mini Cam.  If it just had a little better battery life and a power button that locks it would make it even better. So as far as snowboarding cams go we found this to be one of the better options out there because of the low light, size and image stabilization.

We try to get as many images of the Sony HDR AZ1VR, but forgive us if they're not all there. 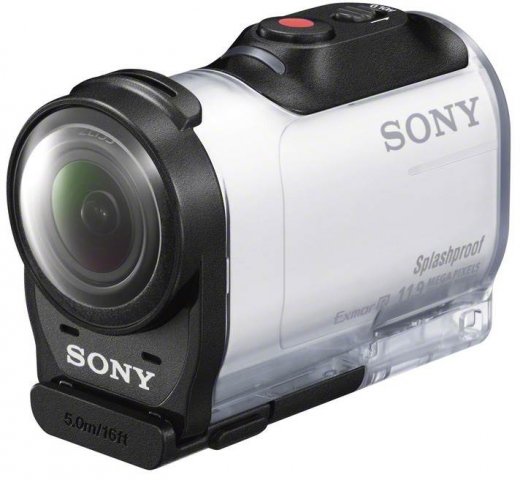