The Sony FDR-X3000 is a horrible name but so are all Sony Cameras.  That being said it’s been the choice for the on-snow portion of filming for 2 years now and most of our footage is filmed with this when we are riding. I’m not that into doing camera reviews but thought I’d give you a snowboarders perspective on why I choose this as my camera when we are riding over the GoPro Hero 6 Black and Hero 5 Black.

First off this how I compared the two cameras. 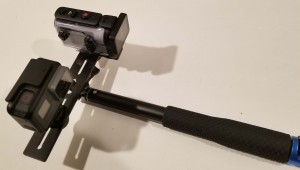 Here is a comparison vid of how the Sony FDR-X3000 faired against the newer GoPro Hero 6 Black. When I compared this to the Hero 5 there was no competition. The Sony killed it but with the Hero 6, it’s very close to the point it all comes down to personal preference.  Both of these vids were shot in 4k 30p with max stabilization. With the Sony, I checked the option to film with digital stabilization to go with the in body image stabilization and as you can see it’s still better than the top GoPro. It’s not quite as good as a Gimbal but it’s getting close.

Video Quality
Even though the Sony FDR-X3000 is a year older than the GoPro it’s still hanging in there.  The colors, although a little on the blue side, are much more accurate than the GoPro Hero 6 Black’s ProTune setting. It seems like it’s set for water instead of snow where the Sony seems to have more of a universal setting. The Hero 6 Black does a better job of keeping the video less pixelated but it’s pretty close.

Sound
There is no way around this.  The sound sucks.  The GoPro sounds soo much better and almost everything we say when the case is on is almost completely muted and when it’s off it’s way too loud.  Even with wind noise cancellation on its pretty bad. I’d love to see them completely change the sound.

Ease of Use
The App sucks less than it used to and it’s almost as good as the GoPro app but it’s a real pain in the ass to pull out your phone in the cold to make a change.  I basically set it up to 4K 30p with max stabilization and just always shoot it that way. There is a little bit of crop but its fine as long as you have a long monopod.

Battery Life
The Sony FDR-X3000 does a great job with battery life and blows away the GoPro Hero 6 Black.   I rarely have to change batteries during a day of filming which means I usually get more footage of us celebrating mediocrity on the hill.

Overall this was a great camera when it came out and it’s still hanging in there against the market 2 years later. It’s a shame Sony seems uninterested in updating this cam and they are focusing on 1″ sensor cameras that only shoot 1080p in the form of a GoPro.  It’s not something I would ever use snowboarding especially since I shoot in 4k and then convert to 1080p.  I found that does a better job than just shooting in the highest bitrate 1080p. I hope Sony isn’t done with true action cameras like this Sony FDR-X3000 but if they are hoping the Hero 7 will improve the image stabilization enough to where its a better choice.  I liked this camera soo much I straight up bought it.

We try to get as many images of the Sony FDR-X3000, but forgive us if they're not all there.