The GoPro Hero 4 Silver is a camera we’ve wanted to try for a while and Peter has wanted for his free diving. It’s probably the best Camera for Surfing and Diving but this review is how it plays out for Snowboarders.

So just to preface this review. This isn’t from some techy camera guy.  It’s from a semi-technical snowboarder that wants to film vids, do an as little editing as possible and post to Youtube or Vimeo.  So this is definitely from a plug and play point and shoot perspective. The only editing I did was to cut and paste clips of similar resolution/formats. The GoPro Hero 4 Silver has some pretty unique features and it’s a very versatile camera for multisport athletes but for snowboarding, it’s video quality is a little off the mark and the battery life is lacking a bit.   On the plus side, it’s got an amazing software interface for the PC and Phone, a very small profile, 4 fields of view and many video formats to play around with.

So for me, the main factor is video quality but sometimes other features can sway me one way or the other when it comes to choosing an action camera. So like I did with the GoPro Hero 4 Black I decided to compare it to the Sony AS200V.  They aren’t as apples to apples as the Sony X1000V and the GoPro Hero 4 Black.  The Sony costs less and doesn’t have the resolution options but I was surprised how well it fared against the GoPro Silver.

So let’s start out with the most popular formats and work our way down. 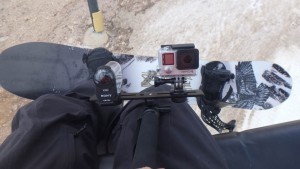 1080p 60fps is still one of the best ways to post snowboarding vids online and it’s still the sweet spot for most cameras.

When filming others with a Monopod it’s good to narrow down the angle a bit so you don’t have to be right on your buddies ass to get the shot. This is a comparison of GoPro’s Medium Angle vs. Sony’s Steady Shot (similar wide angle as GoPro Wide). Here is some footage of me filming my friends on midday groomers as well as them goofing around on some Moguls.

As you can see from the footage the Steady Shot footage of the Sony really makes a difference when filming others.  The GoPro is almost unteachable.  Sony isn’t great but it’s much better than the GoPro.

So we found that the 4K at 15fps (only 4k setting) doesn’t work for Snowboarding.  It’s incredibly jumpy and if I owned this cam it would probably never be used. I’d only use the 2.7k setting at 30fps.  As you can see from the footage I was just cruising at a mellow pace and I wasn’t even pushing myself so at higher speeds, it would be even jumpier.

So another cool feature is all the different angles you can film with.  Here is how wide and how narrow you can get.

So as you can see from the footage the GoPro’s standard settings don’t seem to match up well with snow and low to medium light like the Sony AS200V’s standard settings. Even in 2.7k vs.1080p on a 4k screen, the Sony had a better look. All in all the GoPro had a tint that made the not so good snow look even browner and nasty than it was where the Sony looked truer to the colors we viewed with the naked eye. Now we only had low to medium light but even the GoPro Hero 4 Black in really sunny light didn’t do as well as the Sony X1000V so it makes me believe that even in perfect light the Sony would have the edge.

This is hands down the most impressive part about this little camera. It’s the most intuitive well thought out software I’ve experienced with action cameras. This goes not just for the Phone but the PC as well.

I was hoping the GoPro Hero 4 Silver would have better battery life than the Hero 4 Black but it’s pretty comparable. It’s a little better than the Hero 4 Black but It seemed to run out almost 1/3rd faster than the Sony. With both cameras, I would keep GPS off and only turn on WiFi to change settings through the phone and then turn it off.  I also changed the setting to turn the screen off that’s on the back of the Silver. Still, the Sony had one bar (out of 3) more at almost all times than the GoPro. You need an extra battery to film all day.

With the wind Noise setting on you almost can’t hear anyone talk.  Rushing wind sounds like a trickling stream which is nice.  I’d prefer a little more volume but it’s nothing to really complain about.

So the size of this little box is outstanding. Really hard to believe they have a doable 2.7K 30fps in this small frame.  I’m not into top mounting on my helmet.  I don’t like the look and it’s awkward getting in and out of a gondola.  However, it has a ton of ways you can mount it on a GoPro style monopod or a tripod screw monopod. For some reason, I like the retractable tripod screw style monopods because they extend further and retract to something small enough to fit or mostly fit in your pocket. The attachment that works with this style monopod doesn’t tighten as much as it should and often after a jump or big bump it can fold down a bit and ruin the angle you create.

So all in all the GoPro Hero 4 Silver was not what I expected and I was really surprised at how much better the $100 less Sony AS200V cam performed against it. For snowboarding, the Sony AS200V is a much better choice even though it doesn’t have a 2.7k resolution.  That being said if you are someone who surfs or dives the Superzoom feature, as well as the better waterproofing, make it the better choice.

We try to get as many images of the GoPro Hero 4 Silver, but forgive us if they're not all there. 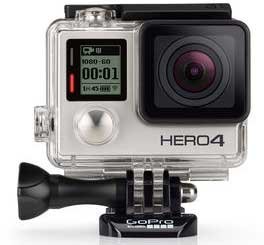