So this isn’t a very techy review of the GoPro Hero 4 Black but instead, it’s more from a plug n play/point n shoot snowboarders perspective.  If you are a video file this review will be beneath you but if you are a snowboarder looking to easily record and post videos then read on.

Video Editing Software Used– CyberLink Power Director 13 Ultra.
I used Intelligent SRT which seems to render in the same format as the original file.  I played around with a few different video editors including Corel Video Studio Pro 8, Corel Video Studio Pro 7, Sony Movie Studio Platinum and read a bunch of reviews on which handles the most formats.  This was the only one that seemed to be able to understand the format of the original file and render it.  Once I found that this works I stopped my search. 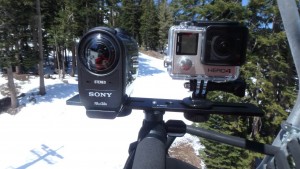 The GoPro Hero 4 Black is pretty easy to set up.  It takes about 15-30 minutes to get it out of the box and integrated with your phone. It’s a very intuitive setup and so is the menu/interface with your cell phone.  Everything that is most important is at the top and it’s spelled out easy for mid-level techy people like me. The best part is the GoPro Studio software that you load to your PC.  It recognizes your SD card and just imports all files to a folder named GoPro anywhere you choose.  Sooo easy! Even though there are a lot of options it’s very easy to find and select everything.  As suggested by GoPro I went with the best plug and play format which is Protune standard with GoPro Color selected

There are more formats than I know what to do with.  You have 4k, 2.7k, 1440, 1080 and 720 in terms of resolution you would want to use.  From there you can choose many options for frames per second from 240fps to 24fps depending on the resolution.  Also, there is Super View which is amazingly wide, Wide (what most will use), Medium and Narrow.  It’s fun to play with all the formats but the reality is I’d probably just use these as they are pretty good for snowboarding:

4k 30fps– Only for perfect sparkling bluebird powder days)
2.7k 48fps-wouldn’t use it too much but a nice inbetweener
1080p 60fps Wide View– I’d use this the most as it’s best for posting online.
1080p 60fps Med View– Good for filming others and keeping a little distance
1080p Superview 60fps– Very wide angle that’s fun fo getting your whole body in the shot when filming from a monopod.  It does make a steep run look really flat though so I’d probably use wide much more.

There are 4 angles that really change up the view:

Video Quality
Overall I felt the video quality out of the cam and onto the PC was pretty good but I felt Sony’s 4K cam had better quality.  You can see a reddish-orange tint to the GoPro that makes the colors a bit off compared to the Sony 4k. Even though the Sony 4K had colors that were a touch more vivid than reality but it still looked truer to life than the GoPro. That being said the GoPro has so many other formats that Sony doesn’t have.  Also if you are a serious video guy filming in raw footage will mean that you can tweak this video to make it look much better than it is right out of the cam. I’m not into post-production and just don’t have the time for it so in this review plug in play is most important.

With wind noise reduction on (much needed for snowboarding) it really reduces the wind noise but it does sound a little tinny.  Still better tinny than all howling wind n such.

The GoPro Hero 4 Black burns through batteries fast and it reminds us of the Sony Mini Cam. Even with GPS and WiFi turned off it still burned out about 1/3 faster than the Sony 4K cam.  If your film every run you take, Use a 1080p setting, no WiFi and no GPS then you might make it to lunchtime so I’d get another battery.

The size of the GoPro Hero 4 Black is remarkable for what it does.  It’s hard to believe such a little cam can give you so much video resolution. I’d rather see it be a little bigger if it means it can hold a bigger battery though.

So there are more accessories than I know what to do with when it comes to GoPro cams.  For snowboarding, it’s more about the Helmet mount and Monopod mount.  The shape of the GoPro isn’t good for goggle mounting.

Helmet Mount- I’m not a fan of the on the top of the helmet position all GoPro’s have.  It’s annoying getting in and out of Gondolas and although not that important I don’t like the look of a helmet-mounted GoPro.  Still, it’s stable and not hard to turn on or off once you get used to the cam.

Monopod- So I mounted this on a tripod style monopod so I needed to buy a tripod attachment. It works well but It’s not perfect.  The GoPro made monopods will be better.

So all in all this is a solid cam that I think a lot of people will buy just because of the name.  That being said if you like to play around with lot’s of high-resolution formats and want to get into video editing then this is the call.  Also, it has a lot of cool features like super view and video formats that the Sony 4K cam doesn’t have.  So it’s a tough call between the only two 4K cams out there.  I like the versatility, software, and size of the GoPro Hero 4 black but I like the battery life and video quality of the Sony 4K better.

We try to get as many images of the GoPro Hero 4 Black, but forgive us if they're not all there. 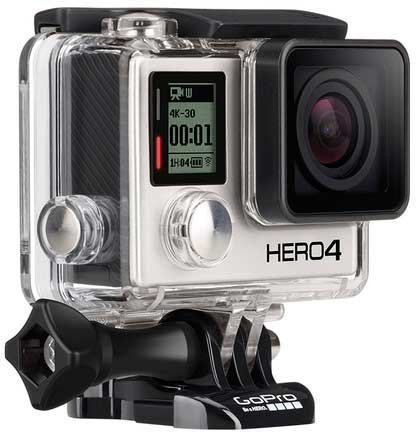