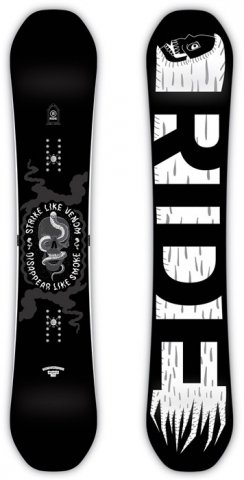 The Ride Machete is a stiffer flexing twin made to ride the mountain hard and go bigger in the park.  The good part about it is it doesn’t get weird on you if you just want to cruise.  Some will love the ultra damp feel and some won’t.  If you want a twin version of the Ride Wild Life here you go.

Flex: Feels like an all mountain or even a freeride flex packed into a twin shape. Medium stiff between the feet and a little softer in the tip tail so it’s not a complete plank.

Sizing: The 155 or 158 would work just fine for my size 9s but it seems that anything 10 and under will work for the regulars.  After size 10 it’s time to look at your boot footprint and figure out which wide will work for you.

On Snow Feel: The Machete is stable and pretty forgiving but still kind of aggressive for those that like to bomb. It’s very easy to one foot and flat base with less consequence than full camber.

Edge Hold: Not perfect and the faster the snow goes from mediumish to hard the quicker the Ride Machete lets go.  It’s kind of a surprise too because it happens rather quickly.

Turn Initiation: The Ride Machete has a quick turn to it and you can turn this quickly in tight spots.

Turning Experience: It’s a fun board to turn and even though it feels a little dead under foot the overall feel turning around the mountain is fun.

Carving: The Ride Machete carves pretty well for a twin and as long as there is good snow it will do pretty well.

Speed: This is where the Machete shines.  It bombs for a twin and it outperforms some freeride boards I’ve tried. It’s such a confident feel underfoot when you are pointing it that you go faster than you think you are going.  Not many twins out there go this fast and that’s what attracts a lot of riders to this board. The base didn’t feel super fast but with a thorough and diligent wax job, you can probably get some decent glide.

Uneven Terrain: The Ride Machete can hammer through the poorly groomed cookie filled snow or weave in and out of the bigger bumps like a champ.  It’s great for all day weekend resort riding.

Powder:  The Machete has some float for a twin but doesn’t get this if you plan to set it back. If you want more directional float in powder the Ride Wild Life is the call for sure. If you want to ride switch in powder a lot then this is pretty good for a centered stance twin.

Buttering: Easier than you would think for how stiff it is but it’s still a bit of work.

Switch: Almost perfect and it’s just a little shy of going with an Asym Twin.

Jumps: The pop really improved over the older model but it’s been a while since I’ve been on that. Still, this has the ability to hit kickers of any size and if I wanted to go big I could with this board.

Jibbing: Not a dream jibber.

Pipe: As long as the walls aren’t super icy the Ride Machete is going to be fun and it’s the kind of board I’d like to ride the pipe with. It helps you quickly set up your transitions from wall to wall.

So all in all the Ride Machete really shines as a bomber twin and doesn’t shit the bed anywhere else so I think it could be a good fit if its strengths appeal to you.

You got to love the name of the Ride Machete and the movie kicks ass too. Its flat in the middle between your feet and then rockers up a bit after the last binding mount. It also has a flex more like an all mountain board so if you like to tear down the hill regular or switch this could be fun. The Machete GT is a better all around ride but this still has the advantage when it comes to floating in powder. The 2012-2015 models haven’t changed much except for a few minor tweaks here and there.

A big thanks to P3 in Mammoth for letting us demo this board.

On Snow Feel: This stiff twin offers a smooth damp ride for those that like to go big or ride groomers fast regular and switch. The flat to rocker tech is very stable between the feet and the rocker after the bindings is very subtle. It makes for an aggressive feeling ride that doesn’t really have any consequence if you aren’t on your game like other boards of this flex with a different camber profile would.

Powder: The ride rocker planes and floats rather well for a twin with a centered stance. The mostly flat Machete planes very well when it gets going and it offers a pretty fun aggressive all mountain freestyle ride here. I’d prefer to be on this instead of the Machete GT when there is a decent amount of powder on the ground but in almost every other category here I’d prefer the GT.

Turn Initiation– The Machete takes a bit more work to turn than many boards in this category. It doesn’t take a lot of work but it takes more than many hybrid camber, hybrid rocker and rocker snowboards we have ridden. This is what makes the Machete a bit more fun on groomers but not as easy to micro adjust in the park. Still many people will like this feel when it comes to turning.

Speed: The Ride Machete has the feel of a set back directional all mountain ride jammed into a twins body. It doesn’t make for a lively ride but the speed is very impressive for a freestyle twin. It makes for a board that is comfortable straight lining a steep run and of course having the speed and stability to hit a very big kicker.

Uneven Terrain: This is almost as good at dealing with crappy bumpy snow as it is at handling chatter at high speed. Ride does a good job protecting your body from high and low speed chatter fatigue.

Approximate Weight- The Machete is pretty thick for a twin and because of that it’s closer to the heavy side of things.

Edge Hold: Ride calls there edge’s on the Machete “cleave edges” It doesn’t really have a variation in side cut like the Never Summer boards have but this big edge does have a pretty good grip on the snow. We had a tiny sprinkling of snow but under that it was pretty hard. It was also windy so there were many exposed spots all over the hill and the Machete held it’s edges over all terrain today.

Flex: Not that soft. This is definitely a mid flexing board that is pretty hard to butter around on.

Carving– The Machete can carve pretty well for a twin. The edge hold is good and the medium flex allows for the Machete to make a pretty good carve. We like that the rocker doesn’t start for a bit after the binding so the tail doesn’t wash out. You can lean into a carve but it doesn’t have the ability to spring through the turn like many camber and some hybrid shapes can.

Switch: The Ride Machete is a true twin so of course it will ride the same way switch as it does regular.

Jibbing– There are many better boards out there for this but if you are a good rider it’s not a bad board for lapping the jib park on occasion.

Pipe: Pretty fun in the pipe. It has just enough edge hold and stiffness to handle the pipe. The rocker in the nose/tail make for a pretty forgiving re-entry. We liked the Machete GT better but it wasn’t bad.

Jumps- Riding around the mountain and ollieng over natural terrain we found the Machete to be semi springy. The whole pop-rod tech must help but it still doesn’t give you that spring many boards with camber or hybrid shapes can offer. Still it’s pretty easy to ollie with the flat camber profile. Now hitting jumps in the terrain park is another story. The Ride Machete is made for this and has enough flex to handle the big kickers. It’s also not super catchy if you land wrong.

We try to get as many images of the Ride Machete, but forgive us if they're not all there.