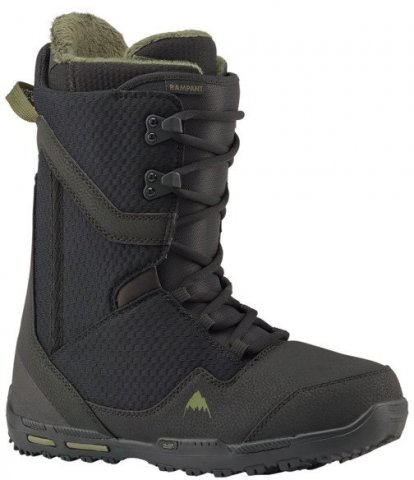 The Burton Rampant might not be for everyone but it’s a well made, long lasting and reasonably priced freestyle boot that will work very well with most easy turning boards. If you aren’t turned off by traditional lace then you might really like this boot.

Also for 2016, there is the Burton Rampant LTD that offers up a lot higher end tech like an infinite ride liner that increases response and longevity of flex.  It’s a little more but a much better call over the regular rampant if you ride lot’s of days a year. It will take a little more time to break in but it will last a lot longer as well.

Comfort: The Rampant is soft and extremely comfortable and felt more like a sneaker than a snowboard boot which many will like.  It felt like the boot was already broken in and after a day of riding, there were no pressure points or blisters.   It made us more into trying Burton Boots because it’s never fun riding in new boots.

Heel Hold: Pretty decent heel hold.  It doesn’t wrap completely around your ankle like BOA but it doesn’t strangulate it either like BOA can do.

Adjustability:  The Lacing system is easy but it doesn’t lock at the ankle or on any of the top either.  This is about as easy as a traditional lace boot can get but we’d like to see a few lace locks so you don’t have to get tricky with tying your laces

Flex Retention:  It has an articulation similar to the Burton Ambush.  It’s a much softer material set into the ankle to allow the top portion to flex a little easier and helps the original flex to last longer. The 2014 Burton Rampant has a little more of this articulation going on.

Response:  The response isn’t great but that’s what you want for softer boards that don’t need much to initiate turns. Light, Soft and playful and moderately responsive would be the best way to describe this boot.

Traction:  Decent traction but nothing great.

Shock Absorption:  The Gel Cushioning isn’t over the top but like the Burton Ion but it does a good job providing shock absorption while still giving you a good feel with the board.

Footprint: Very small on the outside but the same on the inside so you reduce your chance of heel/toe drag.

On & Off Ease: Quicker than most traditional lace boots since you only have 2 rungs at the top instead of 3+ rungs.  It’s not as fast as Speed Lace or BOA but still not bad at all.  I’ve never found myself having people wait for me to get these on or take them off.

Not much has changed from 2012 and 2013 but the 2014 is a little different.  It’s still the same ride but has a little more ankle articulation going on.

We try to get as many images of the Burton Rampant, but forgive us if they're not all there.