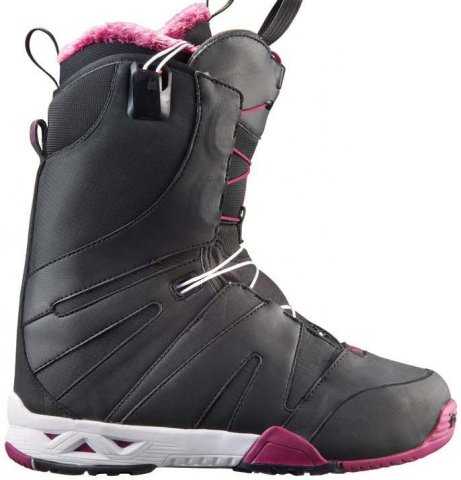 The Salomon Women’s F2.0 is the continuation of the Women’s F20. Some companies change the name but not the product but this time there are changes to both. There are a new cushier shock-absorbent footbed and a new lacing system that really improves the comfort, ease of use and all around the ride.  This is a nice low profile mid flexing boot that it’s a wide variety of riders.

The ride and feel are close to the old F20 but there are some differences. The biggest difference is the bottom of the boot.  The sole went from a hard skate like low profile ride to a cushy but still low profile ride. It’s still low profile but it’s just not hard like a skate shoe sole. Most of us like the added shock absorption but some might still prefer the less shock absorbent skate like the ride of the old F-20.  Almost everyone should like the new easier lacing system that allows the boot to lace more like a Burton speed Lace boot.  There are 2 pulls now instead of twist, attach to rungs, pull, repeat 3 times and then attach to harness at top of the boot.   This is much more intuitive and makes their speed lacing system live up to its name.

The Salomon F20 boot and the F22 are very stiff, low profile and have very good lace system.  It’s not the easiest to get set up but unlike some lace boots, it locks at each upper rung so you can really micro adjust this if you want.  The tongue on the F20 is a little different in 2011 and we like it.  The whole thing that Salomon talks about how it stiffens more when you tighten it is interesting but that isn’t the cool thing.  What we like more is the 3D molded tongue that has a more continuous bend than many of their boot tongues.  Many people don’t mind the standard Salomon toungue that has a kink at the ankle but 3d molded tongue makes for a very even flex that is usually 100% pressure point free. Salomon Boots also last a long time and don’t pack out much.  The F Series is low profile like most Burton snowboard boots so a Size 8 is closer to a size 7.  The F20 also has a great response and the 2011 mode’s semi articulating ankle helps add to this.  Salomon can be tight on people with big calves and wide feet so fyi.  They also can take a while to break in.  All in all, F20 is a solid choice for anyone who wants’s a stiff aggressive park or all mountain snowboard boot.

We try to get as many images of the Salomon Womens F2.0, but forgive us if they're not all there.