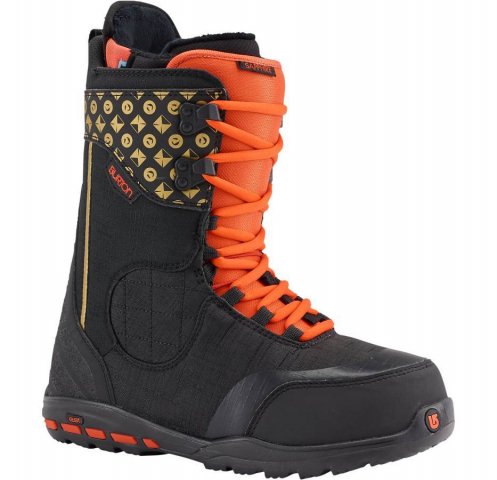 The Burton Sapphire is Burton’s high end soft to mid flexing traditional lace snowboard boot. The Sapphire makes for a great park boot or a good all mountain boot for those who like something soft and comfortable. The articulating cuffs on the Sapphire go almost all the way to the spine and this will help preserve its original flex a lot longer than many other boots in its class.

The 2016 Burton Sapphire has a slightly different shell that has about the same articulation as before but in a different way.

All in all the ride is pretty similar and it’s still a pretty good choice for traditional lace boots.

Flex: On the soft side of medium.

Comfort: Very comfortable. Even Burton’s middle to low-end boots are very comfortable and they make the first few days in the boot a lot better than many boots out there.

Heel Hold: There is pretty good heel hold and most people won’t have issues with the Burton Sapphire.

Adjustability: So Burton’s traditional lace is pretty old school.  The rungs on the upper portion of the boot are wide and smooth so you can tighten the whole boot easier than the traditional lace boots that lock up each rung.  Some will like this and others will prefer the newer type of traditional lacing that locks up on each rung. If you know how to tie a mountaineers knot (look it up online) You can separate the upper and lower parts of the boot but it’s more work than speed lace.

Flex Retention: The Burton Sapphire offers some flex retention but it’s not a boot that holds it’s flex like some of the higher end boots in Burton’s line.

Response: There is a good balance of freestyle freedom and mountain response here with the Burton Sapphire. It’s got a good park and mountain ride.

Traction: So the sole is one piece and that doesn’t make it the best boot when it comes to traction.

Shock Absorption: This has a nice bit of padding underfoot without sacrificing feel. It’s fine for a bad landing. I’m not saying go out there and land flat but if it happens it will help absorb some of that shock.

The 2012 Burton claims that with their new comfort focused re-design there is no break in period.  We are usually pretty skeptical about this claim but we experienced it ourselves and almost agree.

In 2011 the boot stiffened up a bit and also added a rubber pad at the folding point to keep the tongue from pinching.  All years are very comfortable.

In 2010 the Sapphire got pretty soft to the point it almost wasn’t cool.  The 3D Moulded Tounge would not act 3D, fold and create a pressure point near the ankle.

We try to get as many images of the Burton Sapphire, but forgive us if they're not all there.